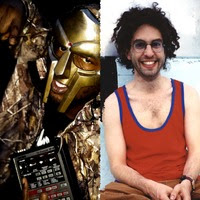 I'm not much of a Barman fan at least he knows how to pick some dope ass beats, due to his connection with greats like Prince Paul, Automator and MF DOOM. "Hot Guacamole" was always my jam too, so this demo version of the track is of course recommended though it's not very different from the version that appeared on "MM... Leftovers". Prince Paul's unreleased series continues (also peep Paul's demo with Missy Elliot from "Pootie Tang" which I believe I never posted last month):

"This was a song was recorded in My studio in the early 2000's .Doom I had know for quite some time and at this point I had recorded Barman " It very stimulating ' EP . Barman wanted to collaborate with Doom on a song which was a great idea . All I remember in recording this was being amazed how these two guys styles complimented each other. Too bad we didnt record more songs that day. We never had a formal release of this demo song but did appear on Doom's Leftovers ."

Posted by lost.tapes.claaa7@gmail.com at 3:06 AM