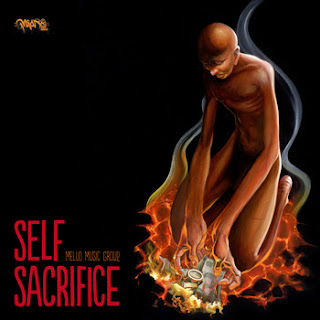 Without exagerating I can say that my most anticipated album of the entire year is OC & Apollo Brown's full-length, "Trophies". I doubt anyone was dissapointed in the premier single "Prove Me Wrong" which has been getting plenty of rewinds where I'm at. Now Mello Music Group can present another brand new collaboration from OC & Apollo in the form of "Prestige of a King". The song will not appear on "Trophies" but is an exclusive joint from MMG's new compilation "Self Sacrifice".

The compilation can be purchased in digitial format direct via MMG's Bandcamp or iTunes. MMG keeps pumping out great music so if you got some spare change $7.99 it's not too much to ask for considering how sick this comp is. "Self Sacrifice" features a mix of brand new exclusives as well as recent records released on the label like some of Gensu Dean's stuff, etc. As I never miss out on posting the latest D.I.T.C. material my choice for highlighting obviously has to be the hardcooking OC jont below. May 1 can't come fast enough!
Posted by lost.tapes.claaa7@gmail.com at 3:28 AM