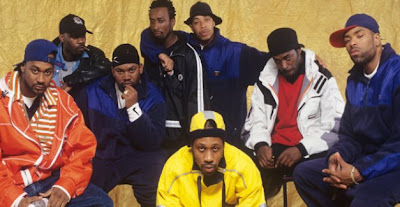 I find it a little suprising myself that I haven't yet done a proper Wu-Tang Clan compilation. "Enter The Wu-Tang" was the first hip-hop album that I bought and they still holds the top spot amongst my favorites as I continue to support the majority of new releases from the crew. I guess one of the main reasons I haven't made one already is because the Wu is such a well known crew and I figured a lot of y'all already would have most of their material. But after looking through the vaults I hope I found at least a few cuts that are new to many of y'all... and even if not, I strongly encourage my readers to play it through like an album rather than just downloading it for ripping out a few tracks. I just gave it a front-to-back play to make sure the sequencing was tight and the compilation runs through smooth as water with only top shelf material included. This time I decided to focus on non-album material recorded by the Clan and/or its members between '95 and '99, all full songs and in good CDQ. I did a little write-up, giving a little background of each piece and such... Enjoy! 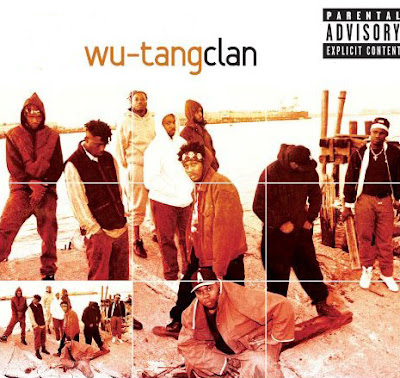 01. "Lay Your Hammer"
Recorded in the "Wu-Tang Forever" sessions, "Lay Your Hammer" was scrapped from the LP and passed on to Funkmaster Flex who included it on his "Mixtape Vol. III: 60 Minutes of Funk". On an energetic RZA beat, close to the entire Wu-Tang Clan kicks outstanding verses in less than two minutes. Fuck a hook!

02. "America" (Ft. Killah Priest)
Classic Wu-Tang cut, lifted from the '96 compilation "America is Dying Slowly", the acronym which also makes up the hook for this one. "America" stands out for a couple of reasons; it's possibly the last released Wu-Tang Clan song featuring RZA's original sample based production style, before he started studying music theory in prepraration of "Wu-Tang Forever". It's also the only released apperance of Killah Priest on a joint billed to the Clan. Anyone who's heavily into the first round of RZA produced solo albums will be amazed by this track.

03. "Semi-Automatic: Full Rap Metal Jacket" (Ft. StreetLife)
"Semi-Automatic" is one of two RZA produced Wu-Tang cuts released on the soundtrack to "High School High" in 1996. U-God and StreetLife throws memorable performances here but the real star of this joint is The Rebel INS who was just unstoppable by the time '96 came around. It's possible this was something recorded for a Deck album, I heard somewhere that they actually had started working on a solo joint for him but unfortunately lost most of the material in a Staten Island flood. I've got a prepared version of Deck's debut album featuring a lot of stuff from "Uncontrolled Substance" coupled with additional songs like this, "Let Me At Them", "Tres Leches" and "Night Shift". Maybe I'll drop it here one day cuz it's truly fantastic and unlike his retail albums actually makes his talents justice.

04. "Dirty the Moocher"
I can't make a '90s Wu-Tang Clan compilation without including one solo joint from Ol' Dirty Bastard, right?! "Dirty the Moocher" is one of the most underrated joints in his catalouge. RZA (behind the boards) and Dirt gives it a straight 1930s Chicago gangsta vibe when sampling and paying homage to legendary jazz musician Cab Calloway and his immortal "Minnie the Moocher". Not a suprising choice for sample source considering this was made for the "Hoodlum" OST back in '96. The main part of the song has to have one of the grittiest and most rugged backing tracks Ol' Dirty Bastard ever rhymed over.

05. "Who's The Champion"
"Who's The Champion" was most likely an outtake from the "Ironman" sessions as it appeared on the soundtrack to "Great White Hype" in 1996. RZA and Ghostface Killah was always superb as an emcee duo as proven by several album tracks between 1993 and 2000 and this is another great statement from the two generals. Especially Ghostface hypes up this track good, finding himself in full-blown storytelling mode similiar to his performance on "Motherless Child". Raekwon appears for the chorus which all the more makes it sound like an "Ironman" outtake; produced by The RZA.

06. "And You Don't Stop"
This track was originally released in 1998 on Def Jam's soundtrack for "Rush Hour" and it's a pretty cool track considering it doesn't really sound anything like a Wu-Tang Clan cut at the time. Not suprisingly, this is not produced by The RZA but rather Dame Grease who was a popular producer at the time, working on albums from Jay-Z and Nas. Grease is clearly trying to compliment the vibe of the flick here, as the synthesizers creates an asiatic sounding theme for the Clan members to spit over. Also stands out as it's one of the rare times Ol' Dirty Bastard appears on a non-album cut billed to the Wu-Tang Clan.

07. "Box in Hand" (Ft. StreetLife)
The original version of "Box in Hand" by Ghostface Killah has been floating around for a long, long time by now. This is nothing short of vintage Wu-Tang right here, with RZA in full sampling mode, Ghost, Street and Meth spraying deadly dartz all over the place and a classic Method Man sing-song style hook that's just as addictive as it is simple. Most likely this song was cut at last minute from the "Ironman" album when they come up with the song that replaced it. The actual track appearing as #8 on the LP is probably totally unrelated to "Box in Hand" although most people obviously calls it by that title since the cover (probably) still refers to the song on this compilation.

08. "One More to Go (Earthquake)" (Ft. Deadly Venomz & StreetLife)
Deadly Venoms was the only female group to emerge from the "W"-umbrella when the Killa Beez started flooding the market in the late '90s. The crew was made up of four emcees including N-Tyce, Lin Que and Champ MC who all had previous record deals in the early '90s and dropped records as solo artists. They never took off as Deadly Venoms although they actually had a lot of talent and fat beats from Protect Ya Neck label in-house producer Ruzz Press. The #1 stand out song from this crew was "One More to Go (Earthquake)", a hard hitting, sinister posse cut featuring all four rappers of the gorup going head to head with GZA, Inspectah Deck, Method Man, StreetLife and Cappadonna. GZA kicks a terrific verse here but they are all killing it.

09. "Sucker MC's"
"Sucker MC's" is of course an homage to Run-DMC  as Method Man, RZA and Ol' Dirty Bastard throw down their own version of the original Queen's trio's classic B-side. After a superb opening interlude (featuring some hilarious off-key singing by the immortal ODB), the song follows the original version closely as far as production goes and there's a lot of quotes from the OG as well. This originally appeared on a 1997 rap compilation called "In Tha Beginning... There Was Rap" which had the most popular artists of the day remaking old school classics by the likes of Doug E. Fresh, Boogie Down Productions, Too Short, etc. Look it up if you ain't heard it!

10. "The Abduction"
Lifted from Tony Touch's immaculate album format mixtape "The Piece Maker", released on Tommy Boy Music in 2000. True Master stands behind the beat on this which is real thumping in his vintage chopped up/broken style and is laced with dark strings. Featuring excellent verses by RZA, Deck, Method Man, GZA and Ghostface Killah so this is a true posse cut, Wu-Tang style.

11. "Shaolin Worldwide"
The earliest Wu-Tang Clan song credited to Allah Mathematic's on production and it's real slamming. This up tempo joint includes turntable work and an addictive synthesizer melody doubling the bass line and is overall a predecessor to "Rules" from the "Iron Flag" album. "Shaolin Worldwide" originally appeared on the 1999 soundtrack to the "Next Friday" movie.

12. "Wu-Wear: The Garnment Renaissance"
Only RZA could hook up a beat like this! There's lots of different parts coming together to form this joint but it never sounds the least cluttered. This was right when the Clan was coming strong with their Wu-Wear gear and "The Garnment Renaissance" is the anthem celebrating that. Was released as a single but recorded for the "High School High Soundtrack". Method Man delivers another one of his classic choruses and any '96 Cappadonna is great Cappa.

13. "Let Me At Them"
"Let Me At Them" was Inspectah Deck's first ever released solo joint and is a mindblowing piece of hardcore hip-hop. An album from Deck in '96 and aggresive beats like this could have put him right on top of the game as he probably had the strongest flow in the Clan at this point. The song appeared on the "Tales From the Hood" OST in 1995 and billed as a Wu-Tang Clan track, produced by Inspectah Deck. R. Diggs got a co-writer credit and if you listen to this and believe that Prince Rakeem didn't have a lot to do with the production you're fooling yourself.

14. "Windpipe"
Released in early 1998 on the "Belly" soundtrack, "Windpipe" premiered a new direction in RZA's production and lyrics as it is probably the earliest released Bobby Digital joint. Fans of "In Stereo" will love this as well and fans of ODB owes it to themeselves to hear his crazy performance on here. RZA on his Bobby Digital steez, Ghost in Supreme Clientele mode and Dirt being Dirt - what a fucking nuts combination!

15. "Wu Gambinos" [Hidden Chambers Remix]
RZA remixed the Wu-Tang Clan masterpiece "Wu-Gambinos" for the B-side of the "Triumph" single two years after the original mix appeared on Raekwon's '95 debut. The vocals are the same and RZA keeps the entire rhythm track from the original but loops up a lone trombone from some old jazz record which gives the entire song a total remake. Very cool, yet relatively unknown RZA remix.

16. "Diesel"
I know a lot of people who hold "Diesel" as their probable favorite Clan non-album cut of all time, and I can definitely see where they are coming from. Why didn't make "Wu-Tang Forever" is still beyond me as it was recorded in those sessions but only made it to the B-side of the "Reunited at the forefront. This production technique was used all over "Wu-Tang Forever" to great effect although a lot of people missed RZA's sample heavy sound. I personally think that album represented most of the Wu Generals lyrical peak and they are going full throttle on here as well where most of them are featured. Ol' Dirty Bastard rips this track in half, kicking several verses." 12" and later the Greatest Hits compilation on Sony/BMG. RZA contributes another one of his intense beats that's so ill yet very minimal with basically only drums and a bassline to really put the emcees Listen to the long instrumental outro in headphones and check out all the tricks RZA pulls from his bag to build up a truly sinister atmosphere. Imagine an instrumental album from this guy at his peak?!