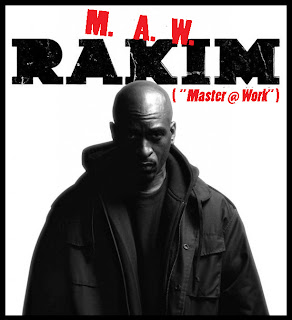 After putting on my previous Rakim compilation, "The Lost Album", I decided that we definitely needed to take a deeper look into the God MC's catalouge of inspiring guest spots, soundtrack work and unreleased material. Last time around I wanted to focus on records from the period between the break-up of Eric B. & Rakim as a duo in '93 up to the release of "The 18th Letter", Ra's '97 Universal debut. For "M.A.W. (Master @ Work)" I'm putting the spotlight on the artists greatest non-album material recorded between '98 and 2003, covering work around the release of "The Master" and his unfortunate stint at Aftermath.

Although often hailed as the most influential rapper of all time, Ra has been the target of a lot of negative critique since the late '90s which became especially audible with "The Master", his sophomore album on Universal Records. The LP saw Rakim take steps further towards a commercialized club sound, according to himself a result of falling in to pushes from the label. While these records clearly wasn't a good look for this particular artist, who's always been an underground hero, the image of "The Master" as a horrible document of a fall-off that it's often given is an unfair one in my opinion. I've seen several writers give the two DJ Premier joints a pass while writing off the remaining fifteen songs. These guys are missing a whole bunch of heatrocks as Ra is still iller and chiller than the large majority of the rap game at this time. If you forgot about the high points of this LP, give another chance to his work with Ultramagnetic MC's TR Love ("I Know"), Big Jaz and Rahzel ("It's A Must"), The 45 King's intense "How I Get Down" and his own "Strong Island" just to name a few, but far from all, good moments here.

It would take an entire decade before the world to get a new Rakim album, a result of unlucky business decisions rather than any break from the music industry. Only a year after "The Master", the artist announced his move to Dr. Dre's succesful Aftermath imprint, a deal that unquestionably sounded promising considering it packed together one of The West's most praised producers with The East's most hailed lyricist. After promises of an album "changing the game again", and an outstanding cameo on the huge hit single "Addictive" by female singer Truth Hurts, Ra was dropped from the label in 2003. It turns out these heavyweights champion just were to different from eachother when it came to making music, as Rakim didn't want to compromise his style to fit into any given gangsta persona. The material that was recorded for an album to be titled "Oh My God!" (check this article for an interesting piece on the recording), including production work by Dre, Mel-Man and DJ Premier, will not be released according to either part. Listeners will get a view of how that LP might have sounded with the songs "Welcome to the Hood", "After U Die", "R.A.K.I.M.", "The Watcher II" and "Cold Feeling", all included on this compilation. Anyone feeling that Rakim fell off after he went solo will hopefuly realize he's the one being way off after getting through the 17 tracks presented below. Enjoy!