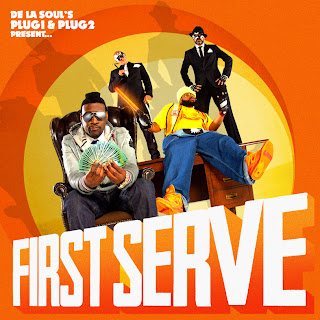 Since "Three Feet High & Rising" in 1989, De La Soul has been one of the most celebrated artists in our field, and to me one of the crews that has been best at adapting to the times without getting lost along the way. Therefore I find it little strange that there's really not much hype for Plug 1 & Plug 2's latest adventure as First Serve considering 2/3rds of De La are dropping a concept album via Duck Down in no less than three days! First Serve is a duo consisting of Jacob Barrow (Posdnous) and Dean Whitter (portrayed by Dave) who, inspired by everything from Kool Moe Dee to Drake, records music in the basement of the Whitter family's house. They come across two hungry producers from France that they hook up with, a duo who goes by 2&4 (Chokolate & Khalid). I'm not clear whether or not 2 & 4 are actually yet another name for Pos and Dave or if they actually have outside producers doing this. If you know please drop a comment. Anyway, First Serve's big dream is to make it in the rap game and transform into rap stars which they eventually succeed with after trying out multiple different type of records and styles. That's basically the concept of the album as far as I understand; sounds like it could come out like an incredible and original record or simply a failed experiment. But De La rarely lets their fans down so I don't have to say that I'm checking for this and if I like it I will pick it up (album will be available on CD, 2xLP and digital).

A few songs have been released from "Plug 1 & 2 Presents First Serve" so far; the first single " Pushin' Aside, Pushin' Along" was a banging Native Tongues 2012 style joint which i'm hoping to hear hear more like on the album. Shortly after we got the video for "Must B The Music" which is very different again, but with De La you should never get too comfortable. This is a track that could work on the radio and it's a decent up-tempo jam and Pos and Dave both spits some ill verses but I hope the LP has less of this style. The most recent joint is called "We Made It" and is a sweeeet joint, real soulful and hype at the same time with Pos and Dave on a very positive tip as this is the track that represents First Serve's breakthrough in the industry on the LP. So what y'all think about the First Serve LP so far? If you're already convinced head over to iTunes or UGHH to pre-order a copy in the format of your choice.

Posted by lost.tapes.claaa7@gmail.com at 3:49 AM