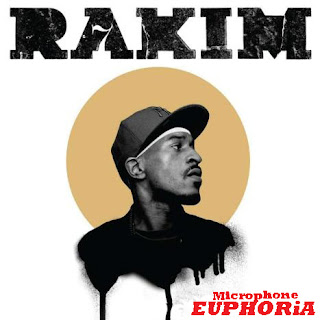 The third and final installment in my Rakim compilation series is called "Microphone Euophoria" and features non-album tracks recorded between 2006 and 2011. It then of course centers around the time of Ra's "The Seventh Seal" which hit the world in 2009 and sadly remains a severely underrated album. As heard all over that project as well as the fifteen tracks represented on the tape below, Ra has always remained an incredibly talented emcee, always calm and in total control of his intense flow which runs smooth as water. In terms of themes and concept songs, "The Seventh Seal" is the artist's most well balanced and consistant album since the split with Eric B. in 1992. Here, Rakim really went deep with his storytelling rhymes as he, to great effect, saddled the roles and perspectives of the struggling working man, the thug on the corner, the real life gangster, the man deep in love, the father, the hip-hop purist and, of course, The God MC. "The Seventh Seal" is a real lyricist's album if I ever heard one.

What worked against "The Seventh Seal", however, was the time elapsed since his previous release almost a decade earlier which amounted to the insane hype surrounding his comeback. When the new project didn't sound much like what anyone expected (for example, no DJ Premier or Dr. Dre beats), many was quick to dismiss it without giving it the proper chance any Rakim album deserves. This, combined with some poor beat selections ("How to Emcee" being the most notable example in my opinion) made the album flop as soon as it dropped. I believe that it will be one of those joints that are heavily reevaluated over time as heads will get past their initial dissapointment and start to pay attention to the  impeccable lyricism and intense storytelling heard throughout the set. With some of the songs found on the compilation presented below, I must say that it's suprising why Rakim didn't choose to include bangers like "It's Nothing", "Word On The Street" and "Euphoria" in favor of some of the weaker moments on the actual LP though. Still, all these tracks are an important part of Rakim's discography and help prove the fact that Ra never left the absolute top of the hip-hop landscape.

In case you missed out on the two previous volumes in the series, they are still up for grabs - "The Lost Album" and "M.A.W. (Master @ Work)". With this last installment, I now have brought you all the essential non-album cuts in Ra's catalouge (there's a few more tracks out there which I cut for various reasons though, go look for them). I hope you'll enjoy these ill compilations as much as I do!

RAKIM - "MICROPHONE EUPHORIA"
Posted by lost.tapes.claaa7@gmail.com at 2:48 AM