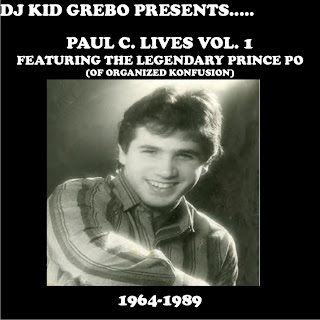 The legendary Prince C. McKasty (1964 - 1989) was around for a very short time but in those few years he managed to influence the sonic aspect of how a hip-hop record could sound. McKasty had a lot more engineering credits than production credits, but back then the engineer was often the guy who would get either producer or most definitely a co-producer credit since they were the hands on equipment. Had it not been for Paul C.'s tragic murder in the late '80s, I am sure that he would have blown up as one of the hottest in-demand producers of the day. His work on Ultramagnetic MC's "Give the Drummer Some" is a legendary cut that, at the time, was unmatched as far as sonic brilliance goes. In early 1989 he was hired by Eric. B & Rakim to ghost produce what would be their masterpiece "Let The Rhythm Hit 'Em" as well as producing a six songs demo for the incredible Queens duo Simply II Positive MC's; better known today as Organized Konfusion.

Paul C.'s name was given huge respect by the hip-hop community and the tragic shooting that took his life in the summer of '69 shook the rap world. Hadn't he passed away then, who knows how far he could have gone?! His music lives on through his catalouge of music he recorded while he were here, but also through his protogé The Large Professor who even named his publishing company Paul Sea Lives. DJ Kid Grebo's mixtape "Paul C. Lives Vol. 1" , hosted by Paul C's friend Prince Po of Organized Konfusion. The tracklist includes much of the work Paul C conducted both as a producer and as an incredibly talented engineer and features lots of impeccable old school jams. Rest in peace Paul C, you will live on! Big shouts and thanks to the good people over at Philaflava/T.R.O.Y. Forums (what up Fortuna) for putting this to my attention as I've been starving for something like this. While you're listening to the 25 tracks tape, take some time and check out the scans of this great article on the musician, posted by our friends at Olas Un Bekons.