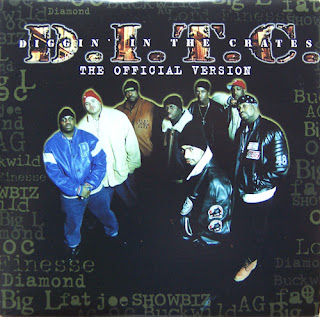 As any fan of my work with The Lost Tapes should be very aware by now, it's that the D.I.T.C. crew is one of my absolute favorite hip-hop collectives out there. Only topped by The Wu-Tang Clan in my opnion, but it's not always very far between them, in my opnion. Since the first time I heard there solo projects like Big L's "Lifestylez Ov Da Poor & Dangerous". Then I heard the somwhat underrated "The Big Picture" and Fat Joe's "Don Cartagena" as well as the absolutely mindblowing "Jealous One's Envy". That was my introduction to DITC, but I really didn't get heavily into them until a few years later through some of the tracks I've heard from their Tommy Boy debut and classic singles like "Day One", "Themes, Scheams..." and both versions of "Dignified Soldiers". Though I really liked what I heard, and was going to pick up "Worldiwde" when it dropped, I never got as far. But a few years later, I really got into their music full time, collecting all their solos and group albums on CD or vinyl, making my collection pretty much 90% of their released material.

The group had a deal with Tommy Boy Records, and between '97 and '99 recording the impeccable but still somewhat underrated "Worldwide". But it didn't stop there, for the vinyl release, they renamed the 2xLP, "The Official Version" independtly, due to label polics. Much of the songs are the same as those found on "Worldwide". The reason it got pushed back so many times, and was finally supposed to drop in '99, it got pushed back one more time. This was because the tragic passing of the late, great Lamont Coleman / Big L and looking back now it was a wise move to go back to the studio to record the beautiful "Tribute". Since so many of the songs had been released on various 12" singles, Tommy Boy was fronting on releasing a vinyl release of the album so they hooked up with Fat Beats to drop this version. Many of the songs appears in remixed forms that had yet to be released, some remixes and some original versions. Highlights include "Where Ya At"; the Big Pun/Milano collaboration but here, instead set over a slamming DJ Premier remix. Likewise, the "Way Of Life" features a totally diferent Buckwild beat, that is actually the original version of the track, that stands in stark contrast to the B-Boy anthem heard on the Tommy Boy album. I personally prefer "Worldwide"; maybe because I've listened so much to that version so much more. Other exclusive tracks are the classic "All Love", "We Known For That", which is actually another Showbiz remix of "Internationally Known" and another Show remix of "Get Yours". This is a FTD rip so all props to them, it's sounding good. This is a must hear for any serious D.I. head and since it's now out of print I provided a link for y'all below.

Not only did the D.I.T.C. crew drop two different US versions of the "Worldwide" album, but they also dropped a very different LP in the D.I. name in Japan on P-Vine records, that's featured about five traditional D.I. cuts (and none from the US albums) along with pure heat produced by Crates members for the likes of long-time affiliates like The Ghetto Dwellas' who provides three bangers, Molecules and more, a superb Lyrical Threat cut, and some more dope shit like three amazing Show remixes previously only available on 12" singles. This is very hard to get your hands on, but I'm gonna post that as an accompanying piece to this post soon so stay tuned. Aight, enjoy and TURN IT UP!!.