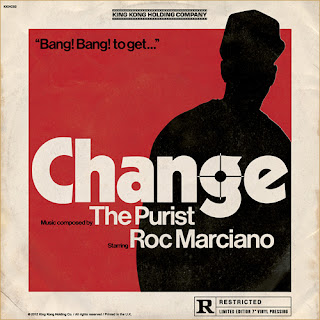 UK producer on the rise, The Purist, has just released his two debut EP:s this year via King Kong Holding Company's BandCamp. The first, "Connect The Spdif EP", features local artists Jhest, Fharma G and Buggsy, as well as some instrumental cuts. Of more interest to The Lost Tapes readers is the "Double Feature E.P.", which features US emcees Roc Marciano, Action Bronson and Ty Nitty rocking over The Purist sick beats. You can stream all nine tracks, including instrumentals, with the option to purchase the mp3s via the link above. A limited 7" 45 single has also been pressed up, featuring the A-side "Change" with Roc Marcy (which you can download for free below) and "Northern & Rozy" with Action Bronson on the flip. The single will be on sale tomorrow and will be packaged with a bonus poster, grab it @ Fat Beats while you still can. This shit is DOPE!

THE PURIST x ROC MARCIANO - "CHANGE"
Posted by lost.tapes.claaa7@gmail.com at 11:48 AM