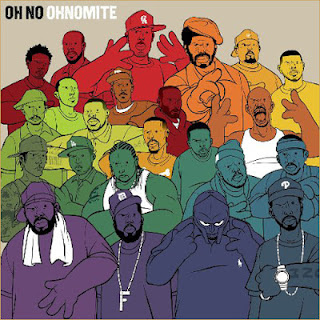 Last week, the psychadelic beat maestro and emcee Oh No announced his next solo album "OhNoMite", and dropped the first street single from the project; the Sticky Fingaz featured "Whoop Ass". As we're getting closer to the release date of 5th of June (damn, this really seems to have popped up out of nowhere), the tracklisting has now also been revealed, and just as I expected it's full of cameos from some of the all-time greats. But the best news of all might just be that it's being released not only on CD and in digital format, but as a 2xLP package as well. All songs produced by Oh No.

PRE-ORDER "OHNOMITE" @ UGHH
Posted by lost.tapes.claaa7@gmail.com at 4:36 AM

Email ThisBlogThis!Share to TwitterShare to FacebookShare to Pinterest
Labels: Oh No