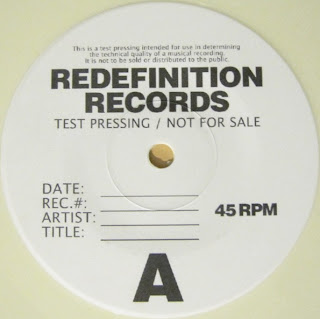 A lot of Ocee on The Lost Tapes lately, which almost alwayss equals interesting music, both from a lyrcail and musical standpoint. I hold his 2003 album "Starchild" as a true classic, and I consider myself very lucky to have gotten a copy of the CD since it's not out of print. The featured song "Who Run It", gets the remix treatment by Damu the Fudgemenk, who does a  great job transforming the sound of Locsmif's more laid-back original to incorporate hardhitting, bass heavy rhythm with aggressive drums, and a very jazz-esque sample chop reminiscent of the Diggin' sound, which of course fits O' perfect. Damu's new take right away connects and compliments the emcee's flow on the cut. I love both versions, but I might very well prefer this over the album version.

Back to "Starchild", Ocee's fourth solo album, released in a very limited pressing on CD in Japan and some European countreis, in a very limited pressing. For vinyl, most of the songs were released on two equally limited vinyl EPs; "The Funk Star", and "The Soul Star". The album was released on Grit Records, a small hip-hop label that had some success around this time with great releases by KRS-One and Soul Supreme along with OC. From there, it was said that "Starchild" would get a proper retail release, but a completely remixed take. Some of y'all might remember that it was originally Pete Rock who were said to remix the entire project, as "Soulchild", later we heard that the remixes would be handled by Beat Fanatic Productions. In 2011, however, the good folks over at Redefinition Records released a White Label 12" with Damu the Fudgemunk's remix, and now that Redef uploaded it to Soundcloud, it now says this was also for a "Starchild" remix project. It seems most likely that they were working on a remix album, with some Pete beats, some Beat Fanatic beats as well as some outside producers. What I know, is that I would fucking love to hear the project in full. You can check out a gang of those remixes in this previous post on the subject.

Posted by lost.tapes.claaa7@gmail.com at 5:04 AM