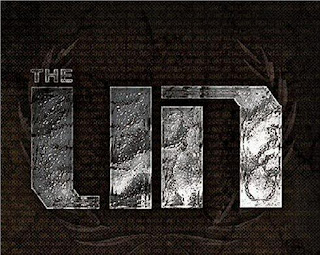 As we continue to honor Roc Marciano and his soon-to-be-released "Reloaded" album, we move on from his days with Flipmode Squad and Busta Rhymes to the hardcore shit he dropped as part of the incredible The UN crew. Hailing from Long Island, the four man group consisted of Dino Brave, Laku, Mike Raw, and Roc. Together they made their recording debut on Pete Rock's "PeteStrumentals" project, recorded in 2000 and released the following year. Their two contributions to the album were some of the finest hip-hop music you were bound to hear that year; "Cake" and "Nothin' Lesser" showed a hungry crew of street lyricists whose hunger and agressive microphone tactics brought out the best in master Pete Rock. After experimenting with several other groups and artists, it seemed that Pete finally had found the perfect act to back 100%. Though he never produced an entire album with The UN, he played a major role in getting their music out there as well as developing them into full blown artists; check out this classic apperance with Pete and UN on KissFM back in 2001, promoting "PeteStrumentals".

It would take until 2004 before the debut album "U N Or U Out" finally hit the streets, but it was worth every minute of the long wait. Filled with grimey rhymes directed at the streets, the hunger and rawness originally heard on the Pete Rock LP sure hadn't been lost in the wait; if anything each of the members had sharpened their lyrical tactics and created a tight chemistry that made the four's words bounce off each other like one mind with four voices. But as any hip-hop head will recognize, superb lyrics ain't worth all that much if the beats ain't hitting. Fortunately that was far from a problem; the dark, hard-hitting production offered by Pete Rock, Large Professor, Oddisee, Mahogany, and Roc Marciano and Mic Raw themeselves, was the perfect soundbed for the group and all connected with each other to create a real consistent album. "U N Or U Out" is a true underground classic, and though it's out-of-print by now, I always recommend anyone to be sure to pick it up if you ever find it - you won't regret it!

A couple of years before the official album dropped, a somewhat mysterious mixtape called "World Domination" started circulating. This 21-track mix-CD featured several of the stand out songs that would later appear on the LP, the tracks from "PeteStrumentals", "Money" that was released on 12" in '03, alternative versions, and cuts and freestyles exclusive to the release. The mix/street album/compilation pretty much stands on it's own as an album, although some of the tracks don't sound fully mastered, and points to "U N Or U Out" probably being recorded several years before it was actually released in 2004. There's some absolute certified heat on here that never made the LP, like The Alchemist produced "Dominant", the Pete Rock laced "Long Time Coming", "It's Over", and the full version of "The Art". I think adding the hottest joints on this would have made the already fantastic debut even more powerful. An obvious must hear for any fan of Roc Marciano and The U.N., make sure to check out "World Domination" below, turn it the fuck up, and enjoy! 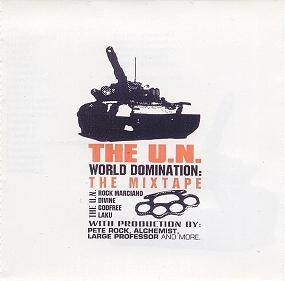 THE UN - "WORLD DOMINATION"
Posted by lost.tapes.claaa7@gmail.com at 5:19 AM