The Lost Tapes is, and will always be a hip-hop blog; one that's "mashed with a passion by claaa7" (that's me). My friends and those who have followed the site for a longer time are well aware that I'm a jazz fanatic as well, and my favorite artists is Miles Davis who, before his passig in 1991, often spoke on his love for hip-hop as the new sound of the streets. He was a true pioneer, and his impact on hip.hop reaches far beyond just being a sample source for atists like Tribe and Black Moon. '91s "Doo Bop" album with Eays Mo Bee showcased the hornman and innovator fully embracing the hip-hop movement but already back in the 1970's he laid the foudation for an early type of hip-hop; just check the album "On The Corner" if you don't believe me, not to mention his life performances at the time which were strictlt mind-blowing to listen to in their own right. One of my favorite albums of all time is "Pangaea"; a 90 minute long excursion into dark funk with jazzy undertones and the collective improvisation of no less than eight loud electrified musicians.Producer Phil Collins invented the "wall of sound", and Chuck D once likened Hank Schocklee's work method as "the wall of noise". The latter epitome coul easily. just as well describe Miles Davis 1970s  jazz-rock sound. When I took my bachelor degree in Musicology at the University, I wrote a thesis on Miles Davis fusion music and how it was met by the jazz press. In one of the moments they also wanted a review of his music written by yours truly, and the review for "Pangaea" was the result. But don't worry, The Lost Tapes will stay just as it is - a blog focusing on true school hip-hop at its finest. Buit I honestly believe that this live set has a lot of similarities with the hip-hop music, and if I can get one person to hear this for the first time then I'm a happy man as, to me, this is easily one of the best LP:s ever released so here goes.... 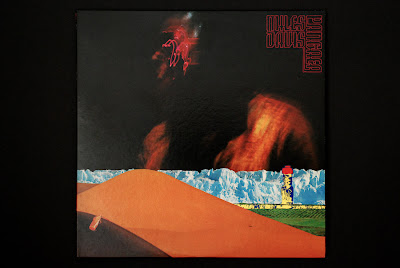 By 1975, Miles Davis had reached the tipping point. By the middle of that year, the physical and mental wear out of thirty years of professional playing and hard drug abuse took out its right on him. But listening to “Pangaea” and “Agharta”, two double LPs both recorded in Osaka, Japan on the first of February in ’75, it’s easy to say that a musical exhaustion were another probable reason for Davis’ “pre-retirement” that would last six years. To reinvent his musical idiom once is more than most artists ever do, but Davis had done it time and time again. But now the music couldn’t be pushed any further down this dark direction it was taking without breaking it up; the concerts represent Miles at the end of the road, but still in full control of the groove.


Out of the two concerts, the late evening set issued as “Pangaea” are the stronger one and possibly the greatest live album you’ll ever hear. Here, all the stuff Miles had been playing on his many ‘70s releases comes together into one large electrified musical melting pot with ingredients of blues, African rhythms, hard bop, free jazz and heavy metal. Most of all it is raw, pure and uncut music that refuses labeling and is best enjoyed when played LOUD. Throughout the set, Davis is heard in fine form and although I like a lot of Teo Macero’s studio wizardry that altered much of the trumpeter’s output during the ‘70s, it’s nice to catch it just as it was played.

Having given up on the multiple keyboards so evident on his earlier fusion albums, Miles’ music are here instead centered on the heavy grooves created by Mtume (congas), Al Foster (drums) and Michael Henderson (bass). The blazing and often Hendrix-like guitar work of Reggie Lucas and Pete Cosey are an integral part of the sound as well. With seven players sharing the stage, this group showcases a brutal energy and loudness that would make the Zeppelin’s of the day nervous. Often using either instrument as a percussive one rather than a way to add harmonic colors, the sound of “Pangaea” is massive.

But there’s a lot of lyrical stuff to be enjoyed here too, especially up front in Miles’ and saxophonist Sonny Fortune’s many brilliant solos. Fortune constantly brings something interesting to the music and is, with his evident feel for harmony, a suiting replacement for the gritty free jazz style of Dave Liebman (heard on the similar live set “Dark Magus”, recorded in 1974). The absolute highlight, however, comes from the leader himself. Close to the end of the concert, during the bands rundown of “Ife”, the tempo is slowed down several notches in order for Miles to solo at length (beginning around the 28 minute mark on disc two). As Davis projects all his emotions into a hauntingly beautiful solo, the leap from “Kind of Blue” to this stage in Osaka doesn’t come across as very odd anymore.


The entire performance is spread out over only two tracks, one on each disc, although it does feature several different tunes that were staples in Davis live performances at the time such as “Tunaroundphrase”, “Tune in 5” and the aforementioned “Ife”. But as was also usual practice, everything is so tightly sewn together that the casual listener will find it hard to tell where one song ends and the next begin. But herein lies also one of the music’s great powers; every single tone, harmonic color, percussive splash and solo are equally important parts that together forms each 45 minutes set into one cohesive, unique composition. It is music without an end and a beginning if you will. Most importantly, it’s one of Davis’ best works and one that was, and continues to be, many years ahead of its time.
Posted by lost.tapes.claaa7@gmail.com at 7:08 AM