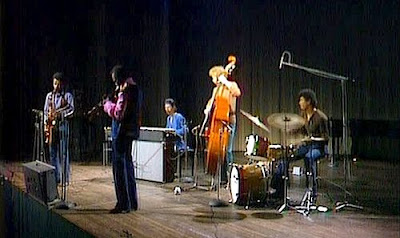 Ok, this is not your typical The Lost Tapes post, but those who know me (alternatively have followed the blog for some time) know that I'm a huge jazz fan; and there's no more interesting and innovative "jazz artist" than Miles Davis. With albums like "On the Corner", "Get Up With It", and "Doo Bop", Davis was probably the earliest jazz/hip-hop fusion artists which is why there's nothing strange about mentioning Miles and his working band on any serious hip-hop site. As for me, his music is also a great bridge for hip-hop heads to find jazz they can relate to.

In 2011 Columbia Records released an almost impeccable box set of five discs showcasing Davis' so called "second great quintet" in various concerts from their European 1967 tour. Most of these fantastic sets have previosuly been bootlegged, but is here released for the first time presented straight from the original masters and presented in the highest possible quality; also including two amazing live concerts on a bonus DVD. Titled "The Bootleg Series Volume 1: Live in Europe 1967": it seems that more volumes will soon be available in a near future. And that's just what's happening in January as the label has dug up three remastered live sets from 1969, along with a 45-minutes long DVD of the quintet's full set at Berlin Phillharmonie on November 7, 1969. This is a definite collector's item, and any fan of classic Miles need to do themeselves a favor and pick this up when it drops on January 29; I know I will. 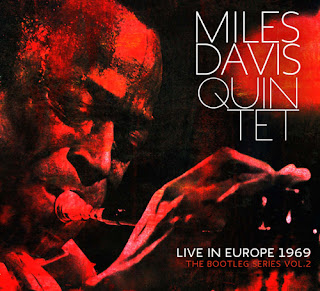 Unlike the previous installment in the series, the focus this time is not on the much praised "second great quintet" with Ron Carter, Tony Williams, and Herbie Hancock. Davis, always a musician on the move and his ear to the street, and kept his ear to the street. The only instrumentalist to stay with "the lost quintet" was Davis himself  and his righth-hand man, saxophonist Wayne Shorter. Another major change was the instrumentation; the quintet (which also featured Chic Corea, bassist Dave Holland, annd drummer jack DeJohnette) who often payed a type of fusion often bordering on the free jazz movemennt. Despite this, they played a more ecleftic set-list either before or after; as themes from Davis' harcbop era like "Round Midnight", the blues ballads from the early '60's ("I Fall in Love to Easily", "No Blues"), the Herbie Hancock compositions from the mid-'60s like "Nefertiti"... And, of course a gang of the more recentt fusion-masterpieces ("In A Silent Way", "Bitches Brew" and "Spanish Key").

The majority of the quintet heard here was first assembled in 1968 when Corea and Holland filled the places of Herbie Hancock and Ron Carter, respectively, forr their parts of the "Filles de Kilimanjaro" album of thet year. Once Tony Williams left the quintet, he recommended Jack DeJohnette to join the band and, what is often refered to as, "the lost quintet" was born. This group was in the center of such landmark albums as "Bitches Brew" and "In a Silent Way", but as a quintet they actually never recorded together, and Columbia missed out the opportunity to record and release anything from this great live band. Until now...  The four discs that make up "The Bootleg Series Vol. 2: Live in Europe" consists of two full sets (1 hour each) from the Antibes Festival in Paris July 1969; a full set in Stockholm as part of George Wein's "Newport Jazz Festival"; and last but not least, a never before released DVD of the full 46 minutes concert at Berlin November 7 @ the Phillharmonie 1969.

Sounds like a pretty amazing package to say the least; especially as its one of my favorite Davis periods, complete with an absolutely terrific backing band and the always incredible Wayne Shorter bringing the heat. The box is released on January 29, so you still have some time to pick up Volume 1 if you are still missing out.

Read more, order and check the tracklist @ MD's official site.
Posted by lost.tapes.claaa7@gmail.com at 2:47 AM