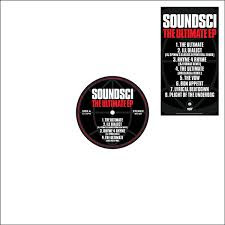 The third and latest release from Soundsci consists of eight tracks put on wax to remind you why you fell in love with hip-hop. Made up of emcee's Audessey, UGeorge and Ox The Architect, with producers The Process a.k.a. Jonny Cuba and Ollie Teeba, the five man crew's music grows from their distinct musical personalities and respective roots in the hip-hop scenes of ATL, New York and UK. That, in combination with their love of that good ol' boom bap, really brings something unique to the table. It's no accident that Soundsci's "Formula 99" was one of the most praised hip-hop albums of last year in real underground circles. And simply put, if you liked "Formula 99" you'll also love "The Ultimate". It's far from a tired repetition by any means though, on the contrary; the crew sound more in tune with each other than ever before, and especially on the five new songs you can hear that they were going for a new sound for these sessions. And that's something I always liked; to make each release something unique without alienating the fanbase and sticking with their guns, which is what they so far has managed to do; "Formula 99", "The Ultimate" and the original debut EP "Dig For Victory" are unqestionably music from the same group, but each release also has its complete own individuality. For this one, I believe that the members were all working together in the studio; at least more than on previous releases, and even if they were not that's definitely the impression you get when listening.

The Review
The A-side kicks off with the EP:s title track, "The Ultimate", and despite all the other new songs appearing on side B I think it was a wise move to have this separated. The later tracks are somewhat more somber while still packing a street element, while "The Ultimate" is straight up-tempo stuff that's as funky as it gets. To me it sounds like an homage to the '80s hip-hop and The Process does a great job with adding a B-boy element to it. The real treat of the song is, however, how well the trio goes back and forth between each other; spitting about 8 bars per verse before passing the microphone around, a procedure which is only breaken up for the chorus which once again reminds me of the '80s in it's simple coolness; "Soundsci, and you don't stop/ we got the illafied flow that makes you're body rock/ It's hip-hop, and you don't quit, we got the super-type of flow, it's THE ULTIMATE". Only a couple of songs later we are treated to a remix of the same song, called the DrillaKrilla remix. I'm not sure whether or not this is an actual producer or a remix laced by The Process but, while it's not as great as the original, it's still a damn dope cut. Musically it's pretty much on the same page, it's once again residing in the funky side of life though in a slightly slower manner this time, but a breakbeat type rhythm is still in tact, you got various horns fading in and out, and the way that the group's vocals have carried over so well to this mix makes it a winner. The only thing I am not sure about is the remix's placement on the record - at first I thought it would have been better having it near the end of Side B, considering that we heard the same vocals only two tracks earlier. At the same time, Side A and Side B does indeed sound a little like different entities, meaning that switching cuts between them might have broken up the flow of both sides.


DJ Spinna, who I consider one of the top 10 producers of all time, is behind the magnificent remix of "The Illest"; a song that I always considered amongst my favorites off the group's 2012 debut. Luckily, Spinna does not try to recreate the original beat or mood, instead opting for a completely new soundbed to accompany the accapellas over. Spinnna's take is a much slower song than the original; you can imagine hearing this in an underground club, with its many recurring sound effects juxtaposed against pounding drum programming are complemented with an extremely deep, dark and rumbling bassline throughout; something I usually recognize Spinna on, and which I see as something that stems from his love of house music. The Fat Joe turntable hook, the hypnotic production work and, just like on the original album, of course Audessey and Ox's vocals all make this something truly out of the ordinary. It's great to see such a different version of one of my favorite tracks, especially as to me DJ Spinna came through and brought in something equally good. Spinna's Classic Beyond Real Remix can also be viewed as a another preview of what SPOX-PhD will bring to the table sometime in, hopefully, a not to distant future (the MC/DJ constellation between OX and Spinna). This is followed by another "Formula 99" remix; "Rhyme 4 Rhyme" flips the beat to an up-tempo funk driven monster where DJ Format arrange a large group of instruments, including horns and guitar, and breakdowns that once again comes off as something of a tribute to the late '80s sound of hip-hop; when funky instrumentals that could get a party going, turntables and battle lyricism was the focus. As mentioned earlier, the two sides of the record really sound like two sides of the same coin, and the A-side is undoubtedly the more uptempo, groove-driven, funk record sampling, party starting side.

"Lyrical Beatdown" was released as a single about a month or so ago and had many, myself included, very hyped for the new release. This is one of them heavy joints with relatively slow but extremely hard drums courtesy of The Process, but it also has a softer quality which comes in the form of a smooth guitar riff which adds a blues feeling to the track. Once again the use of layered production without sounding cluttered seems to be one of Cuba's and Teeba's most accomplished feats, and I hope these releases will give them a lot of outside offers for production. The final cut is called "Plight Of The Underdog" and is another A+ cut with a message to keep strivin' and not lose motivation no matter what people or even yourself might say sometime, something I, and many with me, definitely can relate to. I love how Oxygen's verse starts off over only the somber piano riff and a bassline, constantly building up tension so that when the beat finally drops it's like a rush coming over you; "Momma ain't raised no quitter, but I swear if I don't catch a wind soon I might reconsider/ You've seen my last update on Twitter, the red Oxygen is done with this rap shit, got a lot of y'all bitter/ I love my 21 followers and back in the days rocking mics was more powerful than the dollar was...". Just like in movies, tension and release is a great way to build up anticipation to create a pleasant (or scary) effect once the release comes; this is something I always felt should be used more in hip-hop music and as heard here, it has great effect on the listener. With piano, a looped background vocal, turntables, electric bass, boom bap drums, and even the occassional trumpet, the producers creates an hypnotic feeling that rides perfectly under the two vocalists. As I just mentioned, there's a lot going on here production wise, but never so much that it distracts from listening to the vocals, which is telling both of how well balanced and melticiously planned/produced the music is as well as the fact that Oxygen, UGeorge and Audessey's vocal performances are hypnotic on their own. It's a great closer to a great EP, one that will likely encourage yourself to flip the script and give it another front-to-back listen.

The Conclusion
Being well familiar with the music of Soundsci, I had no hesitation in pre-ordering the EP without having heard any snippets or likewise as I without a doubt expected another dope release. Even then I was suprised by how absolutely terrific this release actually is. Especially when I for the first time threw on the B-side, I could pretty much only shake my head in disbelief; I'd go as far as saying that the best songs on this EP are also the finest tracks Soundsci has yet released. The DJ Spinna remix of "Ill Dialect" is another personal favorite, and one that got me even more hyped for that forthcoming SPOX-PhD album. "The Ultimate" is short, with only 5 new songs and a couple of remixes, but when adding more tracks to a product of this quality, you always risk breaking up the flow of the record - especially as the 8 tracks here really have a certain flow together and gives the overall impression of completion. In conclusion, Soundsci has once again proven why they are one of the absolute most interesting crew in hip-hop today, and with that being said this might be the group's most well-rounded effort today. If you love hard, sample based beats and the finest in lyricism I strongly recommend purchasing this on wax, and if you don't fuck with vinyl, pay the few dollars it costs to purchase the digital copy and support the cause.
Posted by lost.tapes.claaa7@gmail.com at 12:32 PM