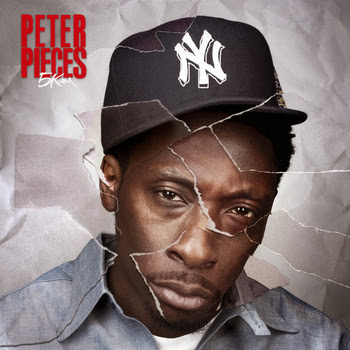 This is another incredible joint I was meant to post a while back but kind of forgot about; I've really been super busy with non-blog related stuff the last couple of weeks, so if I haven't responded to an e-mail or whatever please don't take it personal. Anyways, my main man M-Phatik put me on to this incredible underground producer who goes by 5kiem, and after having listening through his latest digital album/mixtape I'm just about ready to hail this man as the second coming. In fact 5kiem has been honing his skill in silent since way back in 1994, which I give him huge props for; unlike those producers making beats for a year or two and think they are the shit. His influences include '90s greats such as A Tribe Called Quest, Jay Dilla and Pete Rock amongst others. The latter is in fact the focus of his recently released 13-tracks musical journey called "Peter Pieces".
The album is a full-blown tribute to Pete Rock, with 5kiev paying tribute to The Master by creating an album that gives a unique and personal reinterpretation of the beloved Phillips sound (in a few cases even remixing or covering classic Pete tunes), all steeped in 5kiev's very own style of dreamlike boom bap that I'm sure we're gonna hear a lot more from in a very near future. This fantastic and highly original project is pretty much instrumental, but 5kiev does at times incorporates accapellas and interview excerpts from Soul Brother #1 to further establish the connection. This is surely an amazing musical journey that works both as one of the strongest tributes to one of hip-hop's all-time greats, as well as an exciting introduction to one of its future greats. As you can hear I'm talking myself warm about "Peter Pieces", and rightfully so, as it comes very highly recommended from me. So please give it a chance, and if you like it spread the word to your network and let's give 5kiem the shine he dserve.