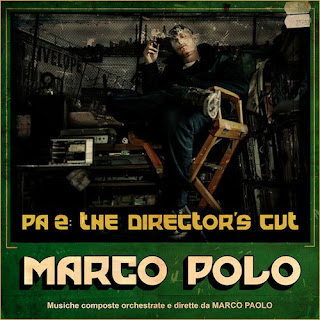 Ooooooh shit, the time is finally hear! If you've been following this blog for at least two months you know that I've been superhyped about the release of Marco Polo's official follow up to his 2007 album "Port Authority"; even going as far as stating that this will without a doubt be among the very best albums of 2013. "PA2: Director's Cut" officially hits stores and retailers via Soulspazm Records this Tuesday but the label and artist have decided to let loose of a full stream of the LP a little early, and luckily I happened to sit at the computer just as they did so so I'm breaking my neck and shaking my head in disbelief to this boom bap monster full of ludicrous hard beats, a guest lists that probably haven't been matched since Pete's first "Soul Survivor" and a whole lot of cuts from turntable wizards such as Shylow, DJ Revolution, and DJ Romes. I'm only a few tracks in but I'm just as blowed away as I predicted I would be... Marco Polo is a name you can count on and has been for years, if he's in the credits you can Count on his placement being one of the best tracks on the LP (one of the most telling examples is the track he laced Torae with for the latter's "For The Record"; an album that also featured contributions by DJ Premier, Pete Rock, Diamond D, 9th Wonder, Large Professor, and Nottz).


Things kick off with "3 O'Clock" and from there it just keeps booming and banging in that hardcore hip-hop direction that only true heads can enjoy - your girlfriend might very well ask you to turn off that damn RACKET!! Litteraly, there's standout after standout, both beatwise and lyrical wise - which isn't really suprising considering it features a majority of my favorite spitters of all time. There's a lot of posse cuts here which are so welcome - hearing Tragedy Khadafi, OC, Inspectah Deck, and Large Professor is sort of a dream come true. The preceding joint featuring Nature, F.T., and Big Twinz is a real Winner too, matching the aggressive Queens style of the emcees with a somewhat more soulful beat... Don't get fooled though, nothing on hhere isn't straight balls to the walls hard as far as drum programming and overall style go. I also like how there's a lot of little crazy beat interludes coming in here and there, sometimes with talk over, sometimes not. On first listen I feel that this is by far Marco's strongest album yet; "Port Authority" was a terrific record with instant classics like OC's "Marquee", Large Pro's "The Radar", Roc Marcy's "Lay It Down", G Rap's "Hood Tales" and so forth. While pretty much all the individual tracks were brilliant, I thought as an album it didn't come all the way through as it sometimes felt more like a compilation than an album, due to a lack in coherrence betweeen the songs. That problem is nowehere to be found here; the skits, the typpe of beats, the sequencing, the guests (which include everybody from Last Emperor, La Coka Nostra, MC Eiht, Breezly Brewin, Malcolm Martin, the original Year Round family with Blaq Po, H. Stax & NYGz Panchi,, etc.), and the emphasis on the DJ makes this a truly exceptional journey into beats and rhymes as they should be done. Hip-hop at it's finest in other Word. And this is just on my first listen.... Can't fucking wait to get this on vinyl and make my neighbors hate me a little more! Stream the full album via OnSmash below, and order the CD from UGHH or iTunes if you're truly diitized. I'ma wait til' December 10 when the 3xLP vinyl drops (this set is like 80 minutes and I'm sure as hell ain't complaining).
01. "3 O'Clock" (Ft. Organized Konfusion + DJ Lynx)
02. "Savages" (Ft. ILLBILL, Slaine & Celph Titled + DJ Revolution)
03. "Earrings Off" (Ft. Rah Digga + Shylow)
04. "Can't Get Enough" (Ft. Big Twinz, Nature & F.T.)
05. "Astonishing" (Ft. OC, Inspectah Decck, Tragedy & Large Professor)
06. "6 Trill" (Ft. The Last Emperor + Shylow)
07. "West Coast Love" (Ft. MC Eiht & King Tee + DJ Revolution)
08. "Wrong Girl" (Ft. Reggie B & Reach)
09. "Drunken Sleuth" (Ft. Invincible)
10. "Intermission" (w. Michael Rappaport)
11. "Emergency Man" (Ft. Malcolm & Martin + DJ Revolution)
12. "Strange Brew" (Ft. Gangrene + DJ Romes)
13. "What They Say" (Ft. Lil' Fame, Kardinal Offishal, Styles P + Shylow)
14. "Parental Discretion" (Ft. Breeze Brewin)
15. "Underdogs" (Ft. Supastitition + Shylow)
16. "R U Gonna Eat?" (Ft. The Doppelgangaz)
17. "Sucka Free" (Ft. Blaq Poet, Hannibal Stax & Panchi of NYGz)
18. "G.U.R.U." (Ft. Talib Kweli & DJ Premier)
19. "Glory (Finish Hard)" (Ft. Masta Ace, AG, Posdnous & Dion Jenkins)