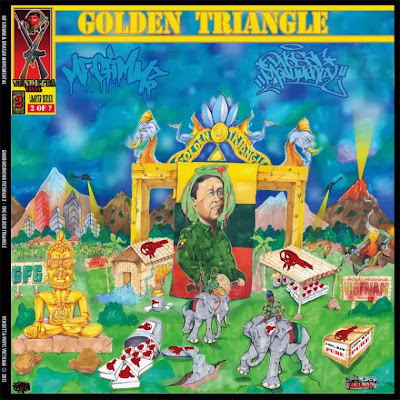 Legendary, yet unfortunately often criminally underrated, emcee MF Grimm and relatively new-on-the-scene producer extraordinaire Drasar Monumental is back with "Golden Triangle"; the very limited vinyl only release of the sequel to last years slamming "Good Morning Vietnam". In my original review of the aforesaid project I gave the 7 tracks EP a 4/5 rating, a rating which I still stand by, but the second installment in the series is even better in most every respect, and works as both a stand alone piece and as a complete back-to-back listen together with the first EP. On "Golden Triangle" the chemistry between Grimm and Drasar has been even more solidified into one of the most magnificent emcee/producer collaborations in recent memory; the music is more powerful and dynamic; the album's metaphorical key themes have seriously been amplified and weaved into the music on a whole 'nother level, through both powerful skits, samples and Grimm's lyrics; and the running time and included tracks is almost twice as much amplifying the original EP into a full-blown LP.

While putting heavy focus on the main themes of the album (which I will explore more in depth further below), MF Grimm and Drasar has here created the most cinematic hip-hop album of the year, maybe in the last couple of years. The combination of the two's contributions here awakes the same feeling in the listener as watching some of the best war movies ever made; such as "Full Metal Jacket" and "Platoon". After an opening intro, complete with blasting sirens, a Bob Dylan sample (a later song also includes a Velvet Underground sample), explosions and radio static, we are lead into the opening song "The Bear". Here Drasar's stupendous bass-heavy production with its knocking drums and rough guitar riff evokes images of the napalm-fueled buning of the Phillipine woods (standing in for Vietnam) of the opening shots of Coppola's magnificent "Apocalypse Now". The music is constantly hard, multi-layered and built around a vast array of samples that together have the impact of a hard punch to the stomach with lines that are often both ruthless and hilarious. Just check the breakbeat heavy golden era homage that is "20%" where GRIMM keeps in line with the vibe of the beat by spitting classic hip-hop lines like "I'm the lord who brings/ You're the lord of the rings/ You sold your soul and all your people out for material things/ Today is your last day, crook I'ma take you/ Taking like your hard, well watch how I break you".

MF Grimm constantly sounds right at home over Drasar's bombastic, yet always elevated Golden Era-esque production, maybe more in tune than he has been at any other point in his career thus far. While the music is often chaotic MF Grimm is inspired to give a jaw-dropping performance where he not only shines as a rapper with an impeccable cadence, flow, delivery and wordplay, but also as a true political and poetical song writer. This relationship is succesfully apparent throughout the 40 minutes set, yet there are verses and songs that stand out as especially mindblowing; among them "The Bear", "20%", "Golden Triangle" and the two final songs. Yet, there's absolutely no doubt that this is a project designed to be heard from front-to-back - which is a strong reason why it's only being released on vinyl and limited CD copies and digital review copies consits of one long 40 minutes track including all the music. And there's no question that this, even more than the first volume, is as coherrent an album as they ever come - whether we're talking albums from the '80s, '90s, '00s.

This is indeed a concept album with, like mentioned before, in a metaphorical way fully revolves around the themes of The Vietnam War and the Golden Triangle heroin trade. But don't think that this is a straight reflection upon what happened from the late '60s and the early '70s between the Vietnam and US. Neither is it exactly using the theme of war zones as synonyms for what's going on in the 'hood as CNN did with "The War Report", though that comes closer. Instead Grimm's lyrics often talks about the problem of modern day US society filtered through a lens of the Vietnam War, letting todays events mirror the war. My interpreation is that the use of the War, which was a sort-of David vs. Goliath scenario where the American opressors, authorized by the US government couldn't win in their opression of the Vietnamese people despite their belief that they participated in a war they could not lose. This is of course the same government who's also the creator of the problems in the US society, and especially in the black community, that Grimm is constantly speaking on. Problems created with the means of controlling the small individual who often don't have the means of expressing their voice, or fight back like the Vietnamese people at one time where believed to be incapable of. Therefore it's extra powerful that Grimm and Drasar closes the album with its most haunting song both musically and lyrically, "Burning Daylight". Drasar creates a mood-filled piece with the use of a haunting vocal sample that acts at the chorus and at times even interacts with Grimm's actual vocals.  Most importantly it offer up the artists' thoughts about the solution to the problems presented earlier on the album - something many emcees who go on and on about the problems they want to bring up rarely have the heart or intelligence to do. A few examples comes with lines such as "True redemption in sight/ I choose the path that's right, few rich men, nothing new under the sun/ Breakthrough all barriers, I'll be the one ... I'm not trying to be offensive, but being poor is expensive/ Economic warfare, victory well-shared/ Let's make a better life... (for you and me)".

The other theme is more double-mirrored and can in my humble opinion be read in two separate ways. The first, and to me the strongest, is that heroin and dope is the dope politically hip-hop music that Drasar & MF Grimm, as well as other legends like Chuck D, Brand Nubian, etc., uses as their weapon to get their music out to the people with which in the long run will help to fight back the governmental oppressors . The second interpretation I have, and I have a feeling that these two might at times be used during various points during the record's run, is that the hard drugs is which the US government introduced (through the Golden Triangle), which is what were introduced by them to enslave the lower-classes of the society in order to make them oblivious to what they actually did and continue to do to the poor people. An interesting fact that connects both themes is that the Golden Triangle where the opium is derivered from and smuggled out of includes Vietnam. A conspiracy theory, that I believe holds a lot of weight, is that high-powered governmental US figures like the CIA was after the poppy fields in Vietnam (and of course Opium is derived from Poppy Seeds, and heroin is in turn derived from Opium). There's of course a lot more to this, and with each listen you find more through both the lyrics and samples that expands the records thematical stand.

Conclusion
Both  lyrically and musically, the metaphorical themes are thoroughly explored both through Grimm's unrivaled lyrics and Drasar's war-aggressive HIP HOP production; not to mention the countless skits that pop up after at least every other track. While they all play out well and holds significance, at a few times they do seem a bit little overkill, though they of course do a lot in helping to create the overall mood. I've already lost count on how many times I have bumped this record since I received it last week and this LP is already one of my absolute favorite albums of the year, maybe even my favorite (though I need to give it a few more spins and let time decide if it continues to hold up this well). And as an even better record than its predecessor I'd say that this might ju be Grimm's most powerful recording date up until this poiint. We should all rejoice over the fact that he and Drasar Monumental have found each other - let's pray that we'll see more from this dynamic duo in a near future. As  I stated before, Part 1 got a 4/5 rating from me, but as this is so damn close to a perfect listen I'm actually gonna go ahead and give this a rare perfect score, something I surely don't do often. As Grimm's final words in the final song states: "Reason why I'm rapping this, for those who can feel it/ Those who can't feel it? They're rocking you, rocking you, rocking you [to sleep]". As this is a very limited release that any fan of these two artists wouldn't want to miss, make sure to cop the record whle it's still available from Vendetta Vinyl and check out the official sampler here.
Posted by lost.tapes.claaa7@gmail.com at 2:55 AM