Blaq Poet is one of the hardest emcees out, and one who's Screwball records, "Deja Vu" and "Tha Blaqprint" I have played religiously throughout the years. But I gotta be honest, his albums post-Year Round Records has been quite dissapointing if you ask me. There were some certified bangers on his first collaboration with Stu Bangas & Vanderslice on "Blaq Poet Society", bibut the replay value was lacking, and the "E.B.K." CD - I'm not even gonna touch that one. It's not that Blaq Po still don't know how to bring the heat like he used to, but after an album fully produced by DJ Premier/Works of Mart (with Easy Mo Bee supplying a guest production), it's pretty damn hard to come back to that type of quality - just ask Jeru The Damaja.
Now he's back with another full-length however on Man Bites Dogs, which marks his second full collaboration with Brutal Music production team of Vanguard and Stu Bangas. From what I've heard so far this is the stronger album of the two based on the tracks we've heard so far - I don't want to jump the gun if it stays in this realm this could very well be Po's best release since 2007. We got a sequel to the impressive "Voices", and guest features from artists including Sadat X, Roc Marciano, Tragedy Khadafi, Chino XL, Vinnie Paz and more. You can order the album and peep the samples @ Amazon (seems to be digital only). Peep the tracklist and artwork: 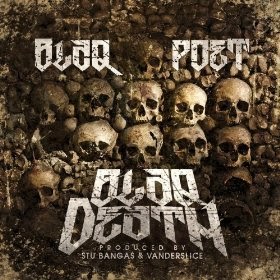