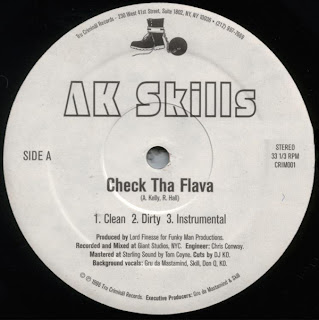 So many raw cats came made their way through the boom bap field during the '90s, releasing a 12" or two that's today considered underground classics, only to never be heard from again. AK Skills is a perfect example of the scenario pictured above. Hailing from Far Rockaway, Queens, he started making a buzz on the underground mixtape circuit with the release of the booming 12" single, "Check The Flava" B/W "Nights Of Fear" in 1996. The songs were produced by Lord Finesse and Buckwild, respectively, and featured some nice cuts by label mate (on Tru Criminal Records) and Street Smartz's DJ K.O. The single created enough attention to allow for a second release the same year, resulting in the equally knocking "One Life to Live" B/W "East Ta West". The B-side was once again impressively laced by Buckwild, while production duties for "One Life to Live" was handled by a Eddie James.

With these four songs, AK Skills' rugged Queens style, great beat selections and connections should have led right to a smashing debut LP. Very unfortunately for both  the man himself and hip-hop heads, that never materialized as it seems AK Skills found himself´incarcerated for a longer bid during this time. One more track managed to reach the surface however, another winning Buckwild collaboration titled "One Thing Or Another", when it was included on a promotional Tru Criminal Records compilation in '97. How much material AK recorded, whether or not an actual album was planned and if we'll ever get to hear a return to the booth are all questions that may very well never be answered. But the five songs released between 1996 and 1997 speaks for themeselves (as well as the rare freestyles) and is a must hear for any hardcore hip-hop loving fanatic. The singles are of course out-of-print by now but if you'll ever come across one of them while doing your digging, PICK IT UP, PICK IT UP, PICK IT UP (as KRS would've said)! Me and Ant, who also put in a lot of much appreciated work on the incredible Truck Turner compilation, thought it would be great to put all those songs together for a digital Lost Tapes EP so here you go peeps!

AK SKILLS - "TRU CRIMINAL EP"
Posted by lost.tapes.claaa7@gmail.com at 2:25 AM