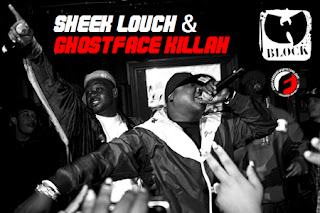 Sheek Louch and Ghostface continues dropping gem after gem from the "Wu Block" sessions; this is no less than the seventh leak since the collaborative project was first announced. "Shrooms" is another heavy hitter that I certainly wouldn't mind appearing on the retail release and besides a super sharp Ghost verse it also features a cameo by Styles P. I strongly doubt that all these loose leaks are actual songs from the album; neither Sheek or Ghost have been known to be lazy when it comes to recording material. My guess is that certain tracks will be included on the album, like The RZA produced title track from the LP that was also the first song released. I'm certain many of the other songs are loosies from the sessions that they rather put out as promotional material to give heads a taste rather than leaving them on the cutting room floor. We'll just have to wait and see but one thing is for sure, "Wu Block" is looking and sounding damn good right now.