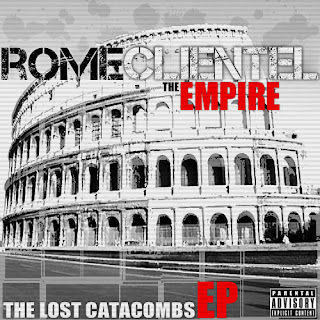 A while back I premiered the debut single by Elmira, NY artist Rome Clientele, "Blue Magic" featuring the always incredible Tragedy Khadafi alongside Alycat and T-Nast. Rome Clientele was then new to my ears but WNYU DJ Dharmic X has brought to my attention that Rome's an emcee that's been in the trenches since the late '90s as a frequent collaborator of Just Blaze before he blew up.

Now Rome Clientele is preparing his comeback and to kick things off he will introuce himself to the world with his upcoming EP "The Empire: The Lost Catacombs" in late April. Production on the records will be handled by a host of sick beat maestros including Large Professor, Just Blaze and Rome Clientele himself with cameos handled by Tragedy Khadafi, Skyzoo and Alycat amongst others. In promotion of the soon-to-be-released EP, Dharmic X sent over "Lifetime Losers" where Rome Clientele gets busy over Styles P and AZ's Large Pro produced "The Hardest". The track works as a preview to the actual Extra-P / Rome C. collaboration that'll appear on the actual EP.


ROME CLIENTELE - "LIFETIME LOSERS"
Posted by lost.tapes.claaa7@gmail.com at 2:45 AM