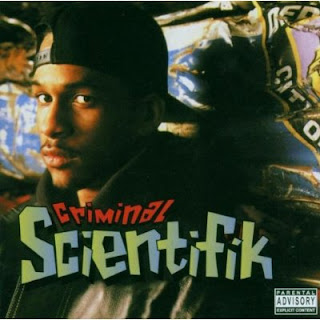 The case of amazing Boston emcee Scientifk, born Darryll Behmann, is one of hip-hop's most tragic cases, not least because his career never had a chance to take off and if it had who knows what kind of legacy he would've had today. In 1993-1994 he got a record contract with small indie label Definite Records who released a limited vinyl only pressing of his debut album, "Criminal" and that was it. Strange thing since I could actually see the LP getting relatively good sales compared to some of the other acts at the time that got huge backing fron major labels. His flow, delivery and lyrical themes stood out as it was clear from track #1 to the #10th and final song that Scientifik was an extremely solid emcee that with the right backing could have been an underground hero, sweeping the rug with some of the emcees holding titles like that around the time. He had an hardcore approach, yet he was clearly an intelligent guy that wanted to sptead knowledge to  the black community.

Combined with this; that the album featured extremely solid production that was right on time quickly solidified its status as a rare underground classic that sadly only the initiated had any knowledge of at the time. In some ways, "Criminal" plays like a D.I.T.C. album at the time as Buckwild provides three absolutelty excellent backdrops and Diamond D is responsible for two (and a vocal apperance on one of the cuts), manking half the album bear the true D.I.T.C. sound. Since he was a Boston emcee he was very close to Ed O.G., one of the biggest names in the city at the time, so of course Ed O.G. supplied no less than two very solid productions and an excellent verse on "As Long As You Know". Speaking about "As Long As You Know", which is clearly one of, if not the nr #1, stand-out moment on the entire disc. It's suprisingly produced by Prince Rakeem (better known now as The RZA) who provides Scientifik with one of the extremely rare outside production at the time, having nothing with a Wu-Tang emcee or affilliate. The song itself is nothing short of brilliant, showing why RZA was in my mind the best producer in the game at the time. Edo G and Scientifik trades bar over a multi-layered beats, that has two main parts; one smooth track with an emphazis on an addictive guitar lick and a second dark, mystical hardcore part with full-blown distorted horns section extremely reminiscent of GZA's "Swordsman" a year later.


None of the beat suppliers on the disc dissapoints the least, together creating a cohessive piece of work that if it would have been promoted as it should would probably be a lot more accepted as one of the true underground classics of the mid-'90s. Other producers chipping in with excellent work includes DJ Shame of The Vinyl Reanimators and Rhythm Nigga Joe who provides the banging "Still A Herb Dealer". R.N. Joe had been down with Scientifik for a long time as both his DJ and original producers, as he had produced the emcees' unreleased '92 LP "The Most Blunted" that wouldn't be available until 1998 for the first time and even then in a very limited output. The "Criminal" LP features lots of heavy turntable work by DJ Nestle Quick which adds yet another dimension to the music.

Behmann's career and life came to a tragic end in 1996, only two years after the completion of "Criminal" on a case that to this day remains largely unsolved and is now prescribed. Not much info has been released to the public about what really happened that night in '96; if I remember correctly I read somewhere that it was a car crash but the info I find now says that Behmann died in a double homocide case involving his wife that remains unsolved to this day, at least that's what "they" are saying. Sources say that Scientifik shot his girlfriend to death after an argument before pulling the gun on himself and comitting suicide. A very tragic story to say the least. But let's not focus on the negative, let's enjoy the banging music that Scientifik recorded during his lifetime. Which was of course extremely limited or in the case of "The Most Blunted" remained unreleased for about 15 years. Thanks to Traffic Entertainment both albums have been given a proper release, so if you find a copy of any of these gems do yourself a favor and pick them up while you still can. And if you haven't heard this amazing Boston, MA rapper and his great ear for beats let's check out the "Criminal" album he recorded in '93 to early '94.  Enjoy and TURN IT UP!!