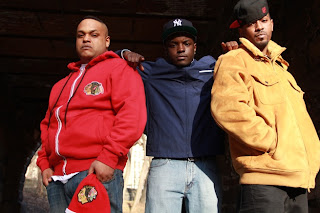 BarBury'N is a recently formed trio consisting of long-time D.I.T.C. affiliates and Wild Life members Milano Constantine, D-Flow (of Ghetto Dwellas) and new artist Gage. They are now preparing their self-titled collective debut album on D.I.T.C. Records. Showbiz has been mentioned as producer of the project but whether or not he's the executive producer or in charge of all the beats on the LP remains to be seen. One thing's for sure, The Lost Tapes will keep a close eye on these guys!


Up above is the group's first video that was released a while ago but slipped under my radar; "Living At Still". Below you can download their latest single "Teleportin'" which is another sick cut. Both tracks are produced by Show and most likely lifted from the upcoming album. Sounding good!