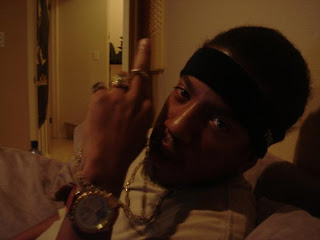 For the first Wednesday in April, RZA dusts off a previously unreleased laidback yet aggressive previously unreleased track by Chicago's The Reverend William Burks for the Wu Wednesday series. I'm feeling the low key strings and atmospheric vibe RZA creates here; it's not your typical Wu-Tang beat but Burks is truly an underrated emcee that can makes wonder with the most minimalistic beat. The real question is when we're gonna get a full RZA/Burks collaboration, the chemistry and friendship is differently there and tracks like "Who's The Man" and "Chamber Of Fear" is among RZA's most natural and most amazing cuts the last few years.

"NOW IT'S APRIL; A VERY RELIGIOUS MONTH FOR MOST OF US SO LET'S TAKE IT BACK TO CHUUUCH WITH THE REV. WILLIAM BURKS... HERE'S THE DEMO VERSION OF A SONG CALLED "THANK GOD".... HIT HIM UP AT @revwillyburks" - The RZA

Posted by lost.tapes.claaa7@gmail.com at 2:06 PM