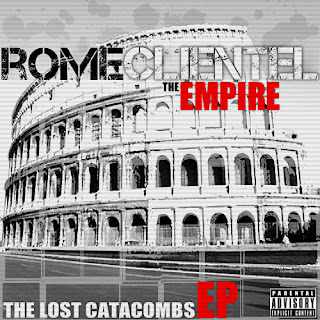 Back in January of this year I had no clue who Rome Clientele was but I was impressed by his Tragedy Khadafi blessed single "Blue Magic". Since then I learned that Rome's is no newbie to the game but in fact been lurking in the underground since the late '90s, closely affiliated with Just Blaze who he worked with on material that got shelved at the time but will soon be leaked for the enjoyment of real hip-hop heads. Right now he's working on his official debut EP, "The Emire: The Lost Catacombs" which will feature production by Large Professor and Just Blaze amongst others.

In celebration of Rome's birthday this past Monday he drops off a loose cut in tribute to one of his biggest inspirations; KRS-One. "The EMCEE" is set over the same Domingo produced backdrop as the KRS original with the same name that always was one of my favorites from the underrated "I Got Next". Check it out and enjoy!

ROME CLIENTELE - "THE EMCEE"
Posted by lost.tapes.claaa7@gmail.com at 2:07 AM