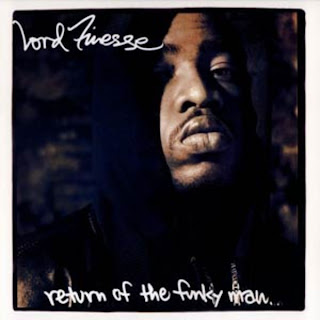 We all know that Lord Finesse has struck a lucrative deal with Paul Nice's Slice-Of-Spice Records which allows him to release loads of vinyl and CDs including never before heard material from the '90s, brand new remixes and breaks tapes. The Lost Tapes has previously reported on the Signature Seven series, seven 7" singles released over a period of time featuring previously unreleased or extremely rare Funkyman music. A press message also mentioned S-O-S finally releasing the extremely delayed "Funky Technician: The Remix Project" as well as an apparent remix version of The Lord's '91 sophomore classic "Return Of The Funky Man". Digging into the archives, the peeps involved has found several never before heard remixes and alternative takes from Finesse's second LP which they are getting ready to present to the world in full good quality, fully remastered by Eddie Sancho, K-Def, Chris Conway, Tony Dawsey and Lord Finesse himself (if you read linear notes you know that those names are some of the absolute best engineers you'll ever find). Mad shouts to labels like this for bringing collectors and hardcore fans the chance to both listen to and actually own incredible music by our favorite artists that we most likely never would have had the chance to even hear.

I'm not much for posting snippets but Slice-Of-Spice has been kind enough to release 2+ minutes snippets of three true gems that will have your mouth watering. One is an unreleased Showbiz remix of "Isn't He Something", Diamond D's original mix of "Praise the Lord" and lastly the OG version of "Funky On The Fast Tip". Classic D.I.T.C. right here baby!