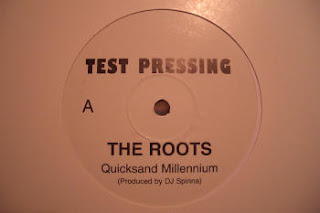 This is an extremely rare white label 12" single for "Quicksand Millenium" that was released in late 1999. The great DJ Spinna produced the song which was supposed to go on "Things Fall Apart" but in the end ?uestlove didn't think it fitted the overall vibe of the album being that it's a calm, almost ambient track. Black Thought loved it however and I can imagine this appearing on his solo LP "Masterpiece Theater" which eventually got shelved and much of it turned into The Roots's "Phrenology". Speaking on that album I think I will put together the songs I either know was from it and the ones I believe was recorded for it and upload it as a c7 take on the original album, we'll see.
The B-side to this white label single is a dope freestyle session from a NYC radio station where Black Thought blows everyones mind as expected. A little trivia is that "Quicksand Millenium" was remixed by Kelo and The Grand Wizzards for the 2005 Roots compilation "Home Grown! Vol. II" so this extremely limited test pressing is the only way to get ahold of the original DJ Spinna mix of this great song. I've been looking for this for a good while and yesterday the incredible guest poster Justice Equality Supreme posted both songs in 320 kbps over @ The Dope House. Much thanks to him and all props to J.E.S. for these rips, i'm just the messenger haha. I labeled them and put them in a .rar file with the covers for both sides, if you want the separate songs just click The Dope House link.

THE ROOTS - "QUICKSAND MILLENIUM" WLB
Posted by lost.tapes.claaa7@gmail.com at 3:10 AM

Email ThisBlogThis!Share to TwitterShare to FacebookShare to Pinterest
Labels: 12" Throwback, The Roots