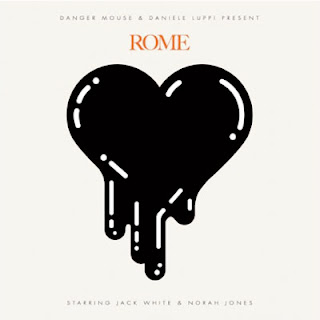 While not a hip hop album per se, Danger Mouse has definitely done enough hot shit in that area to warrant a listen to whatever he choose to drop if you ask me. Last year it was the self titled debut as the duo Broken Bells together with James Mercer, which was one of my favorite albums in the non hip-hop department, and this time the ridiciolously versatile Mouse has hooked up with Italian composer and arranger Daniele Luppi. Luppi has previously contributed on previous DM releases including both Gnarls Barkley albums, "Broken Bells" and "Dark Night Of The Soul", mainly as an arranger of strings. The new album has been given the title "ROME", a modern homage to the classic Spaghetti Western soundtracks of the '60s and '70s that the duo recorded last year at Ennio Morricone's Rome's Forum Studios in Italy.
The sounds are experimental and features a vast array of instruments including an assembly of guitars, strings, keyboards, and contributions from the original musicians that performed Morricone's scores for flicks such as Once Upon a Time in the West, all floating on top of DM's patented drum pattern magic. What we get is something that is maybe best described as a cross between Gnarls Barkley, Broken Bells and the score of The Good, The Bad & The Ugly. The majority of the LP is instrumental but the listener also gets to hear guest vocalists Norah Jones and Jack White lend their voices to circa three tracks each.
I was listening to this in full yesterday and was impressed with what I heard but if you're only thing is hip-hop I would advice you to stay away from this. If you on the other hand have an interest in experimental music that might have a touch of pop sounds, yet strays far away from the commercial bullshit mostly played on the radio these days, then why not give it a shot? If you like what you hear, "ROME" will be released tomorrow on Capitol Records but til' then they put up the entire album for free streaming (if you just want a quick taste I'd recomment tracks #8 and #11).
01. "Theme Of Rome"
02. "The Rose w. The Broken Neck"
03. "Morning Fog" (Interlude)
04. "Season's Trees"
05. "Her Hollow Ways" (Prelude)
06. "Roman Blue"
07. "Two Against One"
08. "The Gambling Priest"
09. "The World" (Prelude)
10. "Black"
11. "The Matador Has Fallen"
12. "Morning Fog" (Interlude)
13. "Problem Queen"
14. "Her Hollow Ways"
15. "The World"