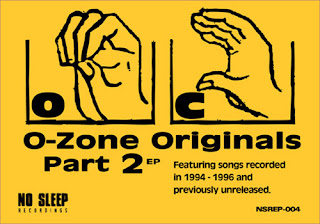 As you already figured out by now DITC is one of my favorite crews (hell I should make this the Diggin' blog) and OC is of course one of the illest emcees of all time if you ask me; especially his early material. No Sleep Recordings is a small label that releases limited but expensive vinyl EPs (think 200 copies) that I believe Buckwild is partly behind; previous releases include the "Buckwild EP" and part one of the "O-Zone Originals EP". The price for this is $50 and since it's a real collectors item this might very well be worth it if you got the cash for it.
Whereas part one focused on demos and promos OC recorded before his classic debut, "Word...Life" with Buckwild produced demos and promotional radio freestyles from 1991 to 1993. Part two continues where the last one pretty much left off, the eight tracks are unreleased songs from the period between '94s debut and '97s "Jewelz". Many of these songs were supposed to appear on the latter but didn't make it because of sample clearances and this jewel features production by Da Beatminerz, Buckwild and DJ Ogee.

If you want to pre-order one of the 175 copies available send an e-mail to nosleeprecordings@gmail.com with subject: ORDER: NSREP-004 O.C. Part 2. In your e-mail you need to provide your PayPal adress, your full name and adress, full shipping adress with postal information for your region whatever country it is, quantity and shipping option (either regular or express). Here's the tracklist:

A1: “Flipside” [DJ Ogee]
This was a track done right after “Word…Life” was finished, but well before “Jewelz” started.

A2:. “Master Ya High” [Buckwild]
This was another track done in between the first two albums. Buckwild ended up using an altered version of this beat for a Faith Evans record years later.

A3: “Gone” [DJ Ogee]
This was an outtake from “Jewelz”. This song was revisted and remixed years later for the “Smoke and Mirrors” album.

A4:. “Kevvy Kev Promo” [Buckwild]
This was a promo done during the early promotion of “Word…Life” for Bay Area DJ / host, Kevvy Kev at KZSU.

B1: “Sharp As A Knife” [Buckwild]
This track was done before “Word…Life” around the same time as “Sugar” and “Outsiders”.

B2: “Stronjay”(Original Version) [DJ Ogee]
This was the original version of the song on “Jewelz”. This has actually leaked before, it was on "Hiddenn Gems" and it's a banger. Check the bottom of the page to listen to it in full.

B3 “Pain” [Da Beatminerz]
This was another song done for “Jewelz” that was deleted at the last moment.

B4. “Sway and Tech Promo” feat. MC Serch [DJ Ogee]
Another promo done for “The Wake Up Show” during the promotion of “Word…Life” I actually found this on my computer, not sure if it's the full version (it's about 1:18), check it out here.