Black Sheep - "Standing Out From The Flock" 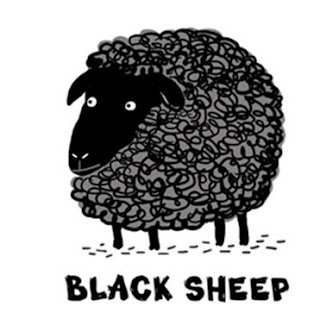 The skilled New York duo of Dres and Mista Lawgne came out with their debut LP, "A Wolf in Sheep's Clothing", in 1991 to rave reviews. Dres was the main emcee while Lawgne handled all the production on the album and there's not many duos with a chemistry like theirs. Black Sheep was one of the last true additions to the Native Tounges collective (De La Soul, A Tribe Called Quest, Prince Paul,, Jungle Brothers, Queen Latifah and a few others). Dres stood out with his unique voice, hilarious lyrics, cadence and as being a real funny guy overall. Mista Lawne occassionally rhymed on the two albums the Sheep released bur he was first and foremost the producer of the duo. Always cooking up funky beats filled with obscure samples that he twisted with finesse and most importany a musical style that really complimented Dres. All-in-all, it was a match made in heaven - one of the better and most groundbreaking groups to emerge in the early 1990s.

Following the acclaim and success of "A Wolf..." it would take the duo three years before their sophomore album would hit the stores. "Non Phiction" was a very different albums in many ways and although it was quite good it came nowhere near the originality and overall vibe of their debut. With that in mind, the following compilation focuses on the first years from The Sheep entered the scene, about 1990, to just before the second LP in '94 and features remixes, guestspots, rare songs and B-Sides Although it's labeled as a Black Sheep mix and Mista Lawnge has prodcued the majorty of the tracks I did include a few Dres features. To cut to the chase, if you're a Black Sheep fan TURN IT UP!

BLACK SHEEP - "STANDING OUT FROM THE FLOCK"