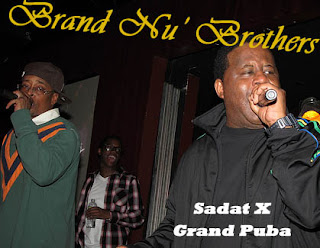 The power trio of Sadat X, Grand Puba and Lord Jamar that is Brand Nubian has to be one of the most underrated groups in hip-hop. Not only are they three very talented emcees that never release a verse without putting some thought into it, they also have an impeccable catalouge of incredible albums. Everything from "One For All" to "Foundation" is in the 4/5 to 5/5 area if you ask me, yet they rarely get the same recognition as, say, A Tribe Called Quest or Mobb Deep. Recently I've been banging all those LPs a lot and wanted to make something additional with some non-album tracks for my iPod.
The result was this slamming collection of Sadat X's and Grand Puba's collaborations and guest features together. While I am a big fan of Lord Jamar as well it's undeniable how dope X and Puba sounds as a duo; amazing and original flows, clever lyrics and maybe most important, two of the most distinct voices in all of rap music. They sound almost like blood brothers with that high-pitched and unique voices that's just perfectly suited for hip-hop - in fact when I first started listening to these guys I had sometimes hard to tell them apart from eachother. A problem that goes away with repeated listens of course.
This compilation features 15 songs from 15 different sources, everything from B-side remixes, soundtrack joints, producer albums (Handsome Boy Modeling School, DJ Honda) plus various cameos. It spans from 1995 to 2010 with the most recent cut being "There Will Be Blood" from the Buckwild/Celph Titled album and the earliest is "I Like It" remix from the 12" single by Puba. I decided to also include two tracks featuring Lord Jamar, one being the "Lump Lump" remix from '96 which was the first time the world got to hear the trio reunited after the four year long separation with Grand Puba. The only track that I know about that I wasn't able to get my hands on is the Frankie Cutlass remix of Eternal's "Dreams" so if anyone has that please upload it and inform me in the comments section. Check it out, enjoy and TURN IT UP!!

Posted by lost.tapes.claaa7@gmail.com at 7:27 AM