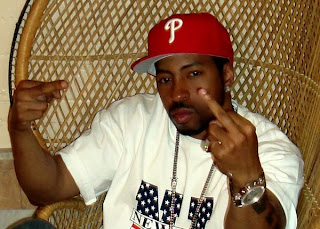 Roc Marciano stays grinding and it's just lovely to see; he's been around since way back then. From dropping a rare 12" in 1997, becoming part of Flipmode Squad in '99 (and actually guiding Busta for the entire "Anarchy" album) to form the impeccable underground phenomenon The UN, Roc Marcy was always one of the illest underground artists. After a few years of relative silence he came back real strong with last years masterpiece "Marcberg" followed by a shitload of cameos and promo tracks, building a stronger rep than he ever had before and no one deserves it as much as the Strong Island native. You can check out this compilation of Marcy B-sides and cameos I put together here; "Caviar: The Album" @ The Lost Tapes.
Just now two new Roc Marcy cameos hit the net which I'm hooking y'all up with and my man Magnifik hooked me up with a full version of a rare Pete Rock production that leaked in snippet form years ago; "Under Pressure". It's from a J-Love tape though so you know how that goes, lots of DJ tags all over it but it's still nice to hear since the track is a certified banger. Also props to Robbie @ Unkut for the Ray West/AG joint which is taken from their new EP "The Pianos Companion EP" which is a limited 7" 5 track release with AG on the mic and Ray West on the boards. Take your chance while that still is available and order it @ UGHH.com.

ROC MARCIANO - "Unda Pressure"
Posted by lost.tapes.claaa7@gmail.com at 5:19 AM