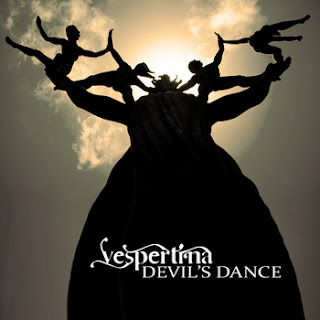 Stoupe The Enemy of Mankind should be considered a hip hop legend and a super producer but the guy is criminally underrated despite every amazing beat he created for the Jedi Mind Tricks catalouge. Despite his talent he hasn't worked with too many legendary emcees which is a shame (save for GURU, MOP, Sean Price and a few others) but it seems he's moving away more and more from the epic boom bap pieces he's known for; last year he dropped a collaboration with singer Liz Fullerton which had real atmospheric, soulful and cinematic production that suited Liz's beautiful voice to perfection.
Vespertina seems to be a similiar project to the one mentioned above, it's a project between producer Stoupe and singer Lorrie Dorzia and judging from this single it's different but straight up amazing if you got an open mind. The song is called "Devil's Dance" and will appear on their long player "The Waiting Wolf" which will be released on May 10 which is looking to be a great day for us underground heads since eLzhi is dropping his promising "eLmatic" that day too.
VESPERTINA - "DEVIL'S DANCE"
Posted by lost.tapes.claaa7@gmail.com at 2:28 PM