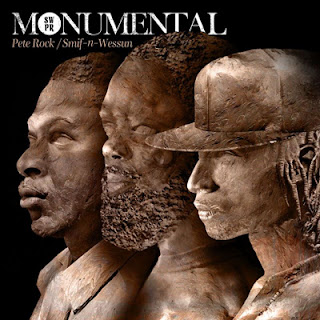 Below you can see what is probably going to be the official artwork for the album, this image was also used in one of those YouTube videos promoting the album if i'm not mixing that up. If you're following this blog you know that the Pete Rock produced fifth album by Tek-N-Steele a/k/a Smif-N-Wessun is my most anticipated of the year so far and every new promotional video, interview or single will be up as soon as I get my hands on them. This time good poster and big Pete Rock fan Jin10304 found this and put me on to it so much props goes out to him.
From the interview we learn, amongst other things of course, that it was (not too suprisingly) the rhyming duo who approached Pete to produce their entire next album and as soon as they started working they noticed the chemistry was there. The album will be about 12 songs, and I guess at least an intro and maybe outro (hopefully something like a banging Pete Rock beat with some shouts from the PNC's). There were additional songs made but the trio and label experienced problems with sample clearances; there's a good chance that these songs will be released in one way or another at a later time however.We also get a few track titles, etc; check it out below.
FULL INTERVIEW WITH STEELE @ CHINA CHOP MAG
Posted by lost.tapes.claaa7@gmail.com at 3:17 PM