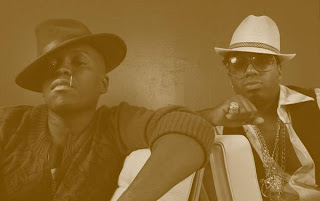 As you should be aware of already Camp Lo has hooked up with Pete Rock to form the trio 80 Blocks From Tiffany's. The first single from an upcoming album was released with a video a while back, "Mic Check", as well as a free mixtape featuring the Camp Lo duo rhyming over classic Pete Rock beats. So far it's all been promising stuff and to be honest I don't expect anything less than great from this collaboration and although a release date isn't set in stone yet it seems to me that the LP will be out this year for sure. Below is an interesting interview with the trio, shouts to Jin10304 for the link.
On paper, the pairing of Pete Rock and Camp Lo seems like a savvy move, given that you guys came to prominence during the burgeoning '90s New York hip-hop scene. Did you find forming 80 Blocks From Tiffany's to be a natural fit?
Pete Rock: Yeah, it was pretty natural. I've always been a fan of Camp Lo's music. I was actually leaving a studio session and bumped into Technician the DJ on the street as I was picking my car up. The Camp Lo guys were in a session nearby, so Technician asked if I could come up and say hello to them, and I did that. I ended up jumping on a song with them and Styles P. They liked some of the beats I played for them. That's when we decided to [link up].

Was there any initial concern over merging two very distinct sounds?
Geechi Suede: I think that's why it worked. Pete Rock is one entity and Camp Lo is another. The way we bridged it was through 80 Blocks from Tiffany's. So the whole dynamic of the sound is something that is completely different than from what people have known any of us to do.
Sonny Cheeba: What we bring to the table together cats haven't seen yet. That soul feel is still there. We have a lot of visuals in mind and approaches that nobody is doing.

You have already released the 80 Blocks From Tiffany's mixtape. There's been talk that you guys are already working on a sequel.
Geechie Suede: Yes, we are working on part 2. The [recording process] has been great.

READ FULL INTERVIEW @ THE BOOM BOX
Posted by lost.tapes.claaa7@gmail.com at 1:39 AM