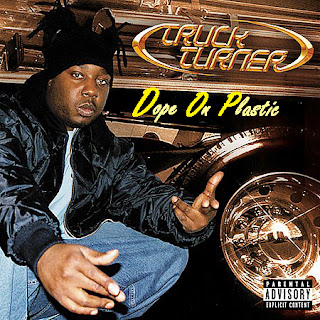 For DJ:s, militant vinyl collectors and followers of that late '90s Boom Bap, the name Truck Turner should definitely ring a bell. Not much information is available about Truck as an artist but its common knowledge that he was a sort of protogé of KRS-One at least between 1997 and 2000.  At the same time he was initiated as an official member of the legendary Boogie Down Productions / BDP Crew (no, they never disbanded as a unit simply because KRS started releasing music under his own name). Truck grew up in The South Bronx region of New York and his rough upbringing and the violence that surrounded him throughout his youth was reflected in his lyrics. Possibly through a good word put in by KRS's and the respect he carried over at the label, Truck signed a deal with Jive Records sometime in 1998 and started recording his debut album, "Look Both Ways Before You Cross Me". The LP was executive produced by Big I-God (who previously had worked with Mesenjerz Of Funk) and was scheduled for a February 2000 release, even given a catalouge number  vy the label (Jive 41689-2/4) indicating the album was completed and wrapped. Like so many other potentially incredible rap albums of the '90s and early 2000s, the album finally ended up being shelved; most likely by a mountain climber who played the electric guitar.

Luckily a couple of very dope 12" singles and a four track EP was released between '99 and 2000 in promotion of the LP, giving fans and DJ:s a chance to hear at least eight of the songs songs which was mostly recorded at the legendary D&D Studios. Listening to these selections you get the impression that this could very well have been one of those lost classics we probably never will get to hear as the songs featured three productions by DJ Premier, two Marley Marl joints as well as one beat each from Showbiz, Boogie Down Productions (i assume that is KRS-One) and A Kids Called Roots. Guests included The Blastmaster on the Preemo induced "Bring it to the Cypher" and KRS, Kool G Rap, Big Punisher, Truck goes head to head on the amazing posse cut "The Symphony 2000" where Marley Marl re-flips his '88 classic and even does some ad-libs between verses to make sure heads understood this wasn't just Truck and his guests freestyling over the original beat.

I've been carrying The Lost Tapes on my back mostly by myself throughout the one and a half years it's been active now so it's always a blessing when I get some much appreciated help from fellow hip-hop connoisseurs including, but not restricted to, Pattch82, Chris Moss and Anthony Zarlengo. The latter, Ant is a former DJ with a vast collection of underground vinyl who's a fan of The Lost Tapes and ripped all his original Truck Turner singles from the Jive era, put them together, sequenced them and send them my way for inclusion on the blog so HUGE THANKS and props goes out to him. Besides the eight Jive VLS tracks, Ant also ripped a white label joint called "Can-I-Bitch" which we added as a bonus track on the compilation... And YES, it's a diss track aimed at Canibus, who BDP had some beef with in the late '90s starting with a few line on KRS-One's "World Perfect" (the B-side only cut from his '96 single "Can't Stop Won't Stop" / "The Emcee"). The only track I personally added was the second bonus track, "The Gravy" which features Shock G in his Humpy Hump persona and Truck Turner and appeared on Digital Underground's album "Who Got The Gravy?" back in '98.

This post has already gone on long enough now but there's one important part to the story left. When Jive Records shelved the album and removed Truck from their roster of artists it seems that fucking Jive didn't get to keep his masters. A couple of years later Truck signed a new deal with BMG/Empire Musicwerks and finally released "Look Both Ways Before You Cross Me" in 2002. This version seem to have very little to do with the original Jive album as none of the original tracks appeared on it, none of the original producers or guests was nowehere to be found and overall it was a pretty watered down version of the Truck Turner music represented on the 12" Collection below. The album flopped hard and since then what was once an extremely promising emcee backed up by some of the best producers in the game seems to have completely dissapeared from the scene. Another sad casualty of bullshit label politics. So that's the Truck Turner story for y'all which is accompanied by Ant's brilliant collection of songs that was recorded for "Look Both Ways...", the original Jive Recors version that is. Hit download, enjoy and TURN IT UP..... A LITTLE LOUDER!!