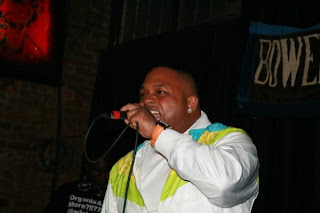 Right before D.I.T.C. dropped their amazing '99 debut "Worldwide", Rudy Mogan (better known by his stage name Milano, sometimes Milano Constantine) was taken under the wings of the D.I. producers, especially Lord Finesse and Showbiz. Now, more than ten years later, he unfortunately has yet to release a proper retail album (not counting 2009's free mini album "Sidewalk Stories)". However, he became an honorary member of D.I.T.C. and appeared on no less than two songs on "Worldwide" alongside Big Pun, Cuban Link and OC. In 2000, Morgan released his masterpiece of a debut single, "Deal With A Feeling" B/W "Rep For The Slums". The single didn't make that much noise, though it got played on a lot of underground stations and was beautifully produced by Showbiz and Amed, respectively.

When D.I.TC. temporarily disolved and changed their name to Wild Life Entertainment, Milano became a full blown memeber of the new crew; dropping hot 16s on several slamming 12" releases such as "Rap Game / Wild Life Theme" and "Done in Vain". The latter was released in 2005, and so was the Show produced "Hope You're Listening", and it's immediate predecessor "Show 'Em", a three track EP, that showcases Milano's distinct flow and sharp lyrics over production by Lord Finesse, Showbiz and T-Ray. Not to be slept on in other words, so make sure to check it out below...

I'm not sure about the following, but some time ago rumours said that Milano was no longer a member of either D.I.T.C./Wild Life after a falling out with Lord Finesse and Showbiz. This might just have been rumours though, and if not everything seems to have worked out in any case, considering he used two Show tracks on his official 2009 release "Sidewalk Stories". And even more, his recently released "The Hurt Locker Mixtaoe" both carries the DITC logo and is largely produced by Amed. Look out for that one here soon as well! Last but not least, major thanks goes out to my man Ant for the hook up of the "Show 'Em" EP. And in case you missed it, you should of course check out my Milano ccompilarion, "BarBury'n Wildlife"! Download, enjoy and TURN IT UP!! 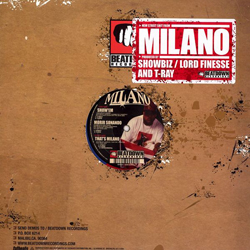