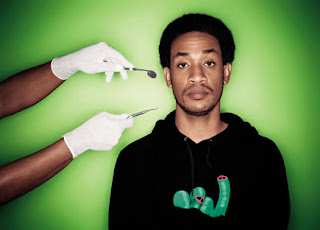 You can't help but to just love the twisted genius mind of a certain Paul Huston. For some time now, the producer has used his Soundcloud page to bless listeners with various rarities, unreleased demo tracks and such. It's been a wile since we were treate that cool Bob James remix, which featured yet another sample twist on the oh so familiar bassline of the classic "Nautilus". Today, the silence was broken as Prince Paul uploaded the, what i take to be, unreleased intro to the "Sponge Bob" soundtrack of all things. Said O.S.T. did however include Paul and Wordsworth's "Prince Pau's Bubble Party" (click to download), stretching the limits of hip-hop and totally blowing up the box rather than thing outside of it.

These two tracks and a 7" released in 2002, featuring the Paul cut "Back to the Lab" as a soundtrack for the children show "Dexter's Labrotary" would later help form the genesis for Dino 5, a group consisting of Paul, Words, Ladybug Mecca, Charlie 2na and Scratch's and their extremely unconventional, and groundbreaking Baby Loves Hip-Hop.  "I recorded this and Prince Paul's Bubble party for the Spongebob movie and this one got rejected .. I actually liked this the best" - Prince Paul
Posted by lost.tapes.claaa7@gmail.com at 1:53 AM