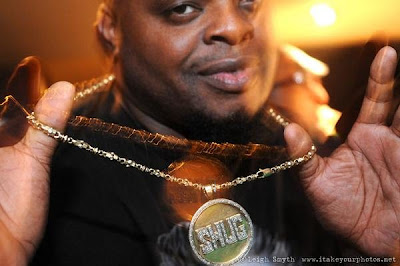 Picking up the trail from where we left off last time, here is Part 2 of my interview with Big Shug. Make sure you got Part 1 covered, and pre-orer Shug's "I.M. 4-Eva" which will be available on the 24th.

c7: As you mentioned before when discussing "We Miss You", you're not only a hardcore rapper but a soul influenced singer with a strong voice as well. Not everyone might know that you're also a singer, so how do you deal with that?

Shug: I mean, I always sang so I was able to introuduce my fan base to it little by little. I'm always singing on my albums, singing the hooks somewhere, know what I mean. I sang the hook on Reks' "Black Cream", and there's a few other underground songs that I''m singing hooks on, so that's the next evolution after this album here. I want to totally dedicate it to that, you know.

c7: What should we expect from that project, and is that something you already got planned?

Shug: Definitely, that's actually the next project. It'll consist of all soul songs; original works, maybe a remake or something too. It's coming eventually.


c7: Already on your 1995 debut single, "Treat U Better" you recorded and released a full blown soul singing anthem, that was radically different from what the other members of The Foundation was doing at the time; although the production was probably as rugged as anything out at the time. How do you look at that song today?


Shug:  The song itself was probably before it's time. A lot of people loved the song, but with the state of hip-hop and everything, it wasn't really ready for it. Right now, I can do a song like that and it would probably be a totally different situation. But it was what we felt [was right at the time], and the crew always knew I could sing, so it was like we got to do this with them. And then on my early demos, I would have singing on them, and managers who were trying to manage me used to always be like "you need to go out there and sing", you know. It was always amazing to people that someone who rapped hardcore such as I did, could also sing.

c7: Yeah, I was definitely suprised the first time I heard that single!

Let's get back to "I.M. 4-Eva" for a moment; I know that one of its selling points in the promo run is that the album comes packaged with a 36 page booklet, chronicling the legacy of Gang Starr and The Foundation. What can you tell me about that? 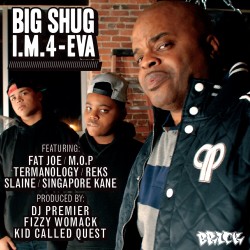 Shug: It's included in the CD packaging/booklet, but it's really like a book; There's sstories of how the group first came together, how me and GURU first hooked up, different stories about the tour bus, the shows and different things like that. There's also a lot of rare photos, and considering it's 37 pages long it really gives people a sneak peek into what was going on with the Gang Starr situation and Big Shug. And it's crazy, because it hasn't really been done before, and it's definitely gonna be a nice collector's item to have.

It represents family because, you know, Premier and me are still involved and doing our thing. On the cover is both my sons, who have grown for as long as I've been in the game; now one's nineteen, and one is twelve. "I.M.4-Eva" means "Immortal Music Forever", because the music will always be there, when I'm gone, the music will still be around. So to have both my sons on there, thar will live on as a legacy of my family as well. So "I.M. 4-Eva" is not only a great album for the music, but also for the movement it represents.

Shug: I'm not sure at the moment, it's possible that it will be done as a collector's item eventually. But right now I'm not sure what's gonna happen with that, you know, but we'll see about that soon!

c7: All the way from your earliest 12"s and up to all your retail albums, DJ Premier has played a pivotal role in crafting the sound. Do you think it would be accurate to describe Preemo as your main producer?

Shug: Well, not really because what it is is, we're brothers and we're the legacy of Gang Starr, so that's why we make sure to have a few songs on every album. Always letting people know that we have a good sound and great chemistry. Also we're gonna do a collective album just the two of us, so that's another thing in the can.

We go back and we're family, you know, but as far as doing records I get a lot of different people, and Premier produces for everyone; but if you listen to the songs that him and I make there's a chemistry there and a certain type of sound, so he's always gonna be there, you know we're always gonna make stuff together. 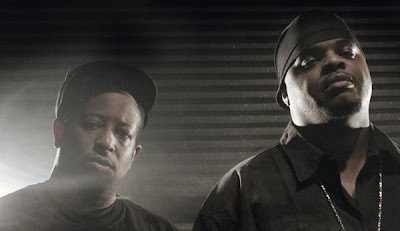 c7: That's interesting you mention a full project with Premier as that is definitely something people been fiending for. What are the plans for its recording and when should we be looking out for that?

c7: You mentioned touring in promotion of the new album, any chances for some European dates as well?

Shug: We're scheduling the tour right now, so I'm not sure exactly where we gonna go, but I really hope we can squeeze in some European tour dates as well. I love being out there in Europe, I love Sweden and all that, and the fans are fantastic so hopefully there'll be at least a few shows overseas as well.

Shug: As I said, I got the singing album, the album with Preem and the tour. I always keep it moving, besides music, I just auditioned for another movie [Shug previously appeared on screen in the movie "The Town" with Ben Affleck and Slaine] that should be out soon. I also coach kids basketball, my son is a real ace on B-ball too, so I got a lot of things planned for the future, and I always keep it moving, and I'm not only talk, I'm all walk. But right now it's all about "I.M. 4-Eva" which drops on July 24.

c7: Alright, that sums up the interview! Thank you so much for taking the time to do this for The Lost Tapes, and I wish you the best of luck in all your future endeavors and keep repping that real hip-hop as you've been doing!


Shug: Thanks man, I appreciate that, and I will definitely keep it 100% real and deliver what the fans want to hear. Peace!
Posted by lost.tapes.claaa7@gmail.com at 2:12 PM