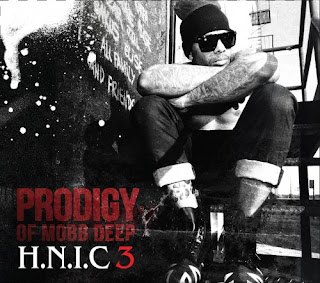 After serving his three year bid, Prodigy is back full throttle. In the last year he's been heard dropping some killer guest verses, and a couple of decent enough mixtapes, all building up to the release of the third installment in his beloved “H.N.I.C.” series. Up until this point, I have yet to be let down by a Prodigy solo, so despite the not so promising look of the tracklist, I was eager to hear the latest offering from the Mobb Deep veteran as soon as it became available.

”H.N.I.C. Pt. 3” starts out with a real bang, in the form of ”Without Rhyme or Reason”, where a re-energized and confident Prodigy announces his presence, reminding listeners why he's lasted this long in the rap game. Backed up by an equally sinister Alchemist beat where the aggressive drums, off key vocal samples and frenetic synthesizer lines compliments P’s vocals like no other producer can, besides Havoc. This is how you open up an album right here! From here we go to “Slept On”; another ALC heater where a real dark, grimey bassline takes sonic center stage. P’s flow is clear and crisp; and while it’s not his ‘90s self, his much slower delivery helps give weight to every word, and his voice is of course still one of legend. The two opening tracks undoubtedly sounds like classic P, and pretty much picks up right where “H.N.I.C. Pt. 2” left off.
However, from here the album takes a left turn, totally switching up from the classic Mobb Deep formula of hardcore rap, starting with the early single “Pretty Thug”. On here, P takes the “Me & My Bitch” route, spitting three verses that spells out like a love letter to his gangstafied chick. There’s nothing wrong with adding one or two a little more commercial records to your album, as long as it’s not feeling force fed and lack in quality. Thanks to producer Ty Fyffe, “Pretty Thug” actually works on a decent level. There's really not that many joints for the female crowd in P's back catalouge, so one for them is clearly not a problem. The beat is thumping and maintains a somewhat hard edge, that establish a balance with the two opening monsters. Following this, it would’ve been of essence to return to the classic rugged shit, but instead things goes terribly wrong with love song after party- and drinking track, each outshining the next in their general corniness and overwhelming wackness.

“My Angel” is no question, the lamest Prodigy record I have yet to hear, and it's painfullfy obvious that this is not the type of music he need to make if he want to keep his fans. The worst thing you’ll encounter here, however, is “Get Money” and “Make It”, which appears back-to-back and are both “produced” by Young L. Both lyrically and musically, they lack anything even remotely close to substance, and are such lame, generic attempts at mimicking the typical mind-numbing commercial club joint of the day. I don’t know what’s worse here though; the clichéd, repetitive synth-driven beats, or Prodigy and his protégé’s Boogz Boogetz attempts to turn these into party anthems. Similiar failed attempts at catching the ears of a younger audience, attached to the worst era commercial hip-hop has ever gone through, returns in various shapes and forms throughout the 65 minutes running time.
I won’t say that there are not some hot records on “H.N.I.C. 3” though, because it’s not a total disappointment. When P reunites with Havoc and Sid Roams on “Who You Bullshittin”, the music gets back on the right track. Sid Roams and Prodigy have a good history together, and this continues that trend, with a more traditionally melodic joint than the often extremely dark stuff they are known for. As so much of the album is fully digital- and synthesizer based, it’s great to hear the strong rhythm track and slick guitar licks that makes up the main part of the beat. “Skull & Bones” is another banger, and from a lyrical standpoint it might very well be the strongest effort of the album. Surprisingly, this is also the only track where P takes on the Illuminati, and its secret societies like Skull & Bones, which is something I would have expected this LP to be filled with. Here, he flips the knowledge he's been injecting on past records in an interesting way, which you absolutely should hear for yourself. Beat Butcha does a great job on the production tip here too; like the Sid Roams cut before it, he incorporates a few samples, giving it a nice warm analog touch that contrast much of the digitized bullshit we’ve heard so far.

Even some of the more commercial songs manage to score some points, especially “Let Me Show You”, where Ty Fyffe cooks up a real smooth banger with a sample that hip-hop heads will most definitely find familiar. Both this, and “Smack That Bitch” is pretty much in the vein of classic soul, using strings, pianos, melodic basslines and, of course, themes of love. The emcee, however, sounds like he's struggling to find his place in this unfamiliar musical setting, and as a result both mentioned songs sounds very out of place on an album called “Head Nigga in Charge, Pt. 3”. “Smack That Bitch”, in particular, gives more time to guest singer Esther, who although strapped with a real nice, strong voice, makes Prodigy sound like a guest on his own record.


The main topics of “H.N.I.C. 3” is without a question those of love and sex. This is, to say the least, suprising for anyone familiar with the emcees back catalouge. More than half of the album is aimed at females, which to me feels like P is disrespecting his core fan base, considering how far off this is from what initially made him a famous and loved artist around the world. I can't imagine that anybody would want to hear anyone from Mobb Deep do an album full of love songs, enlisting Wiz Khalifa, T.I., and a bunch of R&B singers to assist. It clearly smells like a sell-out move; listen to "Return of the Mac" or "HNIC Pt. 2" - there's not a single track on either trying to appeal to radio or club DJ's. Not that it's anything wrong with growth, that's something every artist needs to strive for in order to keep their music true and living. However, the majority of the commercialized songs on this disc fails to even come close to feeling honest. In fact, a good chunk of this project basically embodies everything Prodigy would’ve dissed in a rapper anywhere earlier in his career; and, ironically, even in parts of this album.

With 16 tracks, and about one hour of music, I’ll say it contains between six and eight tracks worth listening to more than once. That’s really not a good average, but what’s worse is that the remaining eight songs are not just boring; they are weaker, more bizzare and cornier than I’d ever dream I would hear P record. It’s both sad and pathetic, considering that Prodigy had a real good chance of reclaiming his spot as a rap veteran still going strong after his three year absence from the scene. Instead he tries to reform himself to cater to the same kids who buys records from Young Money, and Maybach Music, only resulting in an LP that will have many writing him off as a has-been. It’s the first Prodigy album I, in no way, will be supporting. And as the final insult to injury, two really strong tracks, possibly the album's greatest, (the Oh No laced “G-Up” and ALC’s “Serve ‘Em”) is simply left as bonus tracks for some deluxe edition of the album. Sigh……
Posted by lost.tapes.claaa7@gmail.com at 11:10 PM