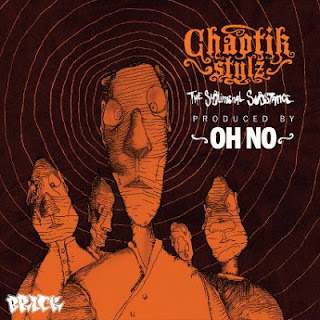 The story of emcee Chaotik Stylz and his forthcoming album "The Subliminal Substance" is an interesting one. From a young age he spent most of his life moving between Buffalo, NY and Los Angeles, CA. At the age of 16 he got into hip-hop and befriended M.E.D, of Stones Throw fame, who introduce him to Oh No and received a beat tape from the psychadelic beat master. It was this tape that would inspire Chaotik to start craftng the rough outlines for an album, and once the idea got more serious he moved out to Oh's Oxnard studio, creating track after track. "We worked the entire time I was there, all I did was choose beats and rhyme during that trip. However, as the process played out, most of the original beats I picked during those sessions were scrapped and new ones were selected. The time I spent out there changed me as an artist and started me on the path I'm currently now on”, Chaotik  says.

"The Subliminal Substance" is now completed,  a concept album of sort that's almost fully produced by Oh Noth with the only exceptions being equally talented couple G&D. Look for it in stores on June 17, but in the meantime peep the first single "Poisonous" which is a real head nodder, with the trio of Chaotik Stylez, Oh No and Roc C sounding right at home. I also posted up the tracklist for the LP; the link to the song is at the bottom of this post.

Posted by lost.tapes.claaa7@gmail.com at 1:52 AM