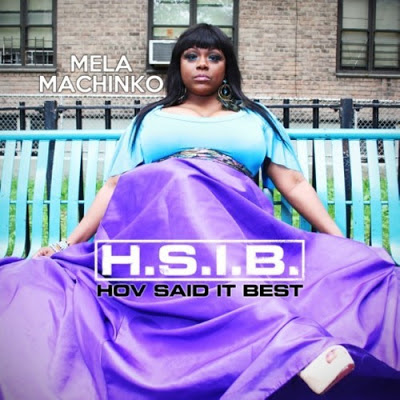 The clock has striken for Mela Machinko, and its more than due for the singer to step into the limelight; a girl that has worked with plenty of artists, but mostly Pharoahe Monch, as a back-up singer, hype man, and a studio vocalists. We first heard her on Monch classics like "Push",  "We Must Be in Love" (w/ DiLLA), and Talib Kweli's "Hostile Gospel Pt. 1". I saw her perform once with Pharoahe Monch in Malmö a few years ago, and her stage presence and soulful voice was just extraordianry and brought so much to the music. So now in 2013, it's finally time for Machinko to step into her own and release a full-length solo album of her own, "Hov Said it Best". Released on June 25 via SoulSpazm Records and promoted by W.A.R. Media, this strong woman's 18-track opus puts her on the map as a talented solo artist over production provided by Preservation, Fatin, Eric G, and others that creates an original and interesting balance between smoky '70s soul, horn driven funk, accoustic jazz elements, and the boom bap hip-hop that she have her roots in through her many guest apperances with aritsts like Monch, KanYe West, Ghostface Killah, and Just Blaze (on the latter's remix of Nat King Cole's "Pick Up").

Today, "Hov Said it Best" lands in store, and if you have followed my blog posts about the respective singles that have been released so far you know that I have huge expectations on what to come from this LP. The title might have a few heads scratching their heads, but Mela is a Brooklyn girl who has been all over the world, partly on tour with her mentor, so when Hov said on "Where I'm From"; "Been to many places, bust I'm Brooklyn's Own!", he might as well have spoken about the singer herself. So it's a pretty cool title, we know that she got skills as a guest vocalist, and we know that the three preceding singles have all been very impressive. Still, the question remains... Can she hold down an entire album all by herself? Let's press play and found out..

Right from the short but powerful opening you instantly get a feeling you're in for something special. From the low-key bass, and horns that accompanies Mela's wailing on "Theme Song" as it's called, it's a powerful intro that lead right into the first song; "Allow Me". Mechinko's beautiful voice shines through over a rather laid-back joint that almost seamlessly blend vintage R&B/soul with hip-hop aesthetics. You got the high-pitched vocal sample, haunting strings, and a pounding bass line underlining some beautiful vocals from Machinko; DJ Boogie Blind gets busy behind the turntables which adds another welcome layer to the song as well. Mela's heavy influence of the music she grew up on, classic '70s soul, funk and '80s/'90s hip-hop keeps on shining with the cleverly titled "Good Groove" that kicks off with a classic breakbeat that most rap fanatics will recognize. However, the joint slows down between the impeccable hooks, adding an addictive vibrophone sample, and a heavy synthesizer bass line that is heard almost throughout. On songs like these, "Holday's End", and "Overdo It"is filled with soul oozing, headnoding music that reeks with horns, strings, keys, and turntale wizardry again provided by DJ Boogie Blind.
The eclectic mix of vintage hip-hop, R&B, soul, and funk truly makes "Hov Said it Best" an extraordinary listen through the production of Preservation, Fatin, Eric. G, and Mr. Len. Speaking on hip-hop, the sampled drum patterns leaves no question about this being as much an R&B album as a funky soul project with a heavy emphazis on the hip-hop side of things. The result is an LP that will be thoroughly enjoyed by conniseours of all types of black music, withouting ever sounding forced or misplaced. Coupled with Mela's incredible mic presence, well written lyrics and impeccably strong voice, there's no question that there's plenty of tracks on here that will remain and embraced as true classics ("I Got Monay", "And Then It Goes All Away...", Get That Cash & Run", "What You Want me to Do", etc.). As I wrote in another post, this is the first new soul album I intend to purchase for full price some time soon, and after hearing the entire project front-to-back there's no question about this deserving a place on my shelf. A perfect record to throw on, whether you're alone or with your girl, and just zone out to. Though the production will grab you're ear from jump, what really make "Hov Said it Best" one of the most interesting releases of the year is not only the terrific soundscapes, but the way that Mela's voice, flow, delivery and lyrics in conjunction with the music manages to create something that's as truly unique as it is fascinating and awards several listens. If there's something to criticize about the actual music it is that the disc could contain a few more actual songs; despite being just 40 minutes, several skits (featuring a game show lead by Pharoahe Monch) are included, as well as two bonus remixes of the song "What You Want Me to Do". But no matter what, there's a great flow to the album and as good as every track being presented here are of high quality. This is 2013 soul straight out the hip-hop dungeons.

Clocking in at only forty minutes, Meka leaves no room for filler material on here. Despite the large amount of varied throwback styles and genres, performed with a mixture of samples and live instrumentation, there's always a red thread throughout the LP being held together by Mechinko's wide array of flows  and experimental performance styles. On each song her strong and unique voice pop out of the music as much as any of the reigning soul kings and queens of the last 20 years - D'Angelo, Lauryn, Bilal, Erykah, Dwelé, and Anthony Hamilton, are all in very good company with this new soulful, strong woman! Much like the classic soul albums released by the aforementioned artists, the strength of Mechinko as a singer/songwriter is furthered even more by the fact that she's holding down the entire LP all by herself. Beside a few "Game Show" interludes featuring Pharoahe Monch, and some fine turntable wizardry by DJ Boogie Blind and Mr. Len, there's no question who's in charge here, and with Mela Mechinko it never gets boring, or hollow. For all these reasons stated above "Hov Said it Best" is strongly recommended to both hip-hop and soul fanatics. It's not a perfect album but it's a damn good one, and one that  shows that the background singer of so many classic hip-hop jams has finally dared to take a well deserved step into the bright lime light as a solo artist... And let's hope she's here to stay!
Posted by lost.tapes.claaa7@gmail.com at 12:07 PM