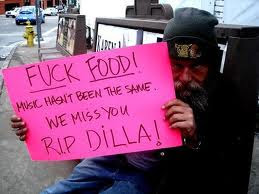 Here's a classic lil' treat I wanted to share with y'all, a live set by J Dilla on the crossfader which was recorded by the Swedish PBS channel P3. The event went down at Inkonst in Malmö on January 25, 2003 and is a rare piece of evidence of how ill Jay Dee was behind the turntables. Here the legendary producer plays nothing but banger after banger from his own extensive catalouge, with Dankery Harv as hype man. Maybe the illest thing about this is how it allows us a glimpse into what tracks Dilla himself considered some of his finest moments up to early 2003. Featured are joints like "Push", "Raise it Up", "Virvant Thing", "Let's Ride", "Step Up", "Take Them Clothes Off", "Look Of Love", "Stakes is High", Busta's "Wait Up", Kweli's "Step to the Side", "Runnin'", just to mention a few. With all the posthumous music coming out from the Dilla camp, wouldn't it be Fan-Tas-Tic to get a mastered CD of something like this, or a live vocal set by Jaylib?

I had this for a few years, but think I originally got it from BamaLoveSoul.com, so much thanks to the guys over there! You already know the deal... TURN IT UP!!!

Posted by lost.tapes.claaa7@gmail.com at 5:10 AM