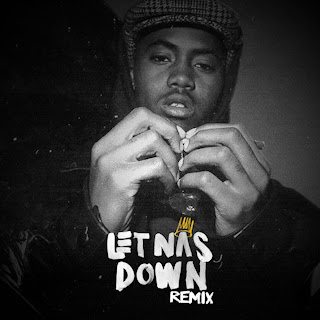 J. Cole can spit, no question about it! However, a little too often the Brooklyn emcee choose to spit over hollow and insipid beats, though when he picks a monster beat like the recent "Let Nas Down" from Cole's new LP ("Born Sinner") magic is bound to happen. For those of y'all who don't know the story, it all begun when J. Cole released his single "Work Out", which legendary Nasir did not take kindly to and was very vocal about. Since Nas had been considered one of Cole's absolute top emcees he had ever heard; he felt he had to write a song about the feeling of letting his idol down, resulting in the self-produced "Let Nas Down"; a very dope song indeed and possibly the LP:s finest moment.
Now, what's even more interesting however, is that the official remix is now availble, and it features a brand new verse by none other than Jones himself. The original beat stays intact, and considering how good this duo sounded on "Life is Good" you know you're in for a real treat here. Very wise choice on all parts indeed!

Posted by lost.tapes.claaa7@gmail.com at 2:24 PM