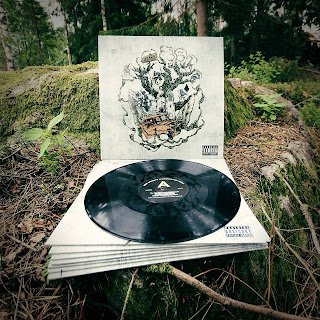 Side Effectz's "Wunderbaum Music" LP is now finally available to order worldwide through their Bandcamp page for the cheap price of around 7 USD plus shipping from Europe. Last Weekend I went to the release party for this album, where I also picked up the LP, and let me tell you that both the show was pretty damn enormous; crazy crowd participation, the guys killing it on stage, etc. And as far as the actual vinyl, it both looks and sound fantastic. This still underrated trio is about to hit it relatively big soon I'm willing to bet on that so if you're feeling it grab a copy while you still can, because this could very well end up being a true and expensive rarity in a couple of years, much like LoopTroop's early 12":s, EP:s, etc. I had the pleasure of interviewing the guys as well, which should be up on The Lost Tapes in the next couple of days so stay tuned. Until this read my full review of the project below; it's actually one of my favorite releases of this year so far.
It's finally hear! After plenty of singles (both album tracks and exclusive joints), several gigs and apperances on radio stations, the Side Effectz's tro third official LP has landed, and its called "Wunderbaum Music". With 10 tracks, and clocking at almost exactly 30 minutes, there's clearly no room for filler here which they also completely stay clear off., You can tell that the trio has worked hard on making sure there's nothing but the absolute best and most fitting to offer their fanbase on here. Everything flows together like a true abum should, it's none of that BS collection of hit songs that's today's ADD riddled iTunes and Spotify kids crave, and despite three producers  are involved in only nine songs (the first is an intro), the group never steer away from the sound that has become their traddemark. The difference is that that sound has never before been truly perfected and sounded so coherrent. Both El Juancan and Akopalips comes through with beats that are both intricate, engaging and "boom baptic". "Red", "Wunderbaum Music", "Stay True", "Sub Zero", "Innaspace" are some of the finest beats not only by Juancan, Akopalips, and  El Campeon has ever made, but also some of the absolute finest hip-hop soundscapes to emerge from Sweden in a very, very long time.

The Boom Bap apostle himself, the group's emcee Linkan is on fire throughout here, he's made quite the remarkable growth as a rhymer since his debut on "AOTS: The Album"; the group's debut that, while good, at times felt more like a glorified demo tape. Linkan's flow is as exceptional as it is complex, constantly playing with different flows and cadences, utilizing double entendres, and multisyllables, only to in a heartbeat switch to a simpler rhyme scheme, sometime, as on album opener and title track, taking on a strong toasting influenced rhyme style. There's a few ad-libs that sounds out of place and should have been left on the cutting room floor and at a couple of times an experimental flow doesn't quite work, but these are minor stuff and everytime it happens, he jumps right back on track.

Linkan rhymes for the half-depressed everyday man, reminiscing about his days on the benches with the boys getting wasted, slaving at the factory,  dissing the school system for being corrupt, etc. There are moments of joy shining through though, and when it does it often result in the album's finest moments. On "Red", over a somber Juancan production with a haunting bass melody and matching keys, Linkan takes a trip down memory lane, sharing with his listeners how he first caught the hip-hop bug. On "Focus", which because of its subject matter is an exceptional LP closer, our emcee dedicate the song to his long-time fiancee and the thankfulness he feel to her for giving birth to best joy of his life, a new born baby girl. It's a triumphant song, mainly because of Linkan's soulful performance, but  also because Akopalips gives him a blending backdrop that really captures and elevate the subject matter. The aforementioned song features a singer by the name of Mariam, who is also the album's only guest (save for guestproducer Daniel El Camino). This is definitely a breath of fresh air in today's market where only a few great rappers, i.e. Roc Marciano and OC, does not surround themeselves with as many guest vocalists as the album has tracks. This is another strength of "Wunderbaum Music", even though I like previous guests such as Cap One, S.T.I.C.S., and Antone Mecca, it leaves no question who's running the show here and such a direct spotlight cast a very bright light on Linkan which this time leaves no little question that he's one of the absolute finest emcees Sweden have to over.

"Wunderbaum Music" is a highly recommended listen; every song is nothing but quality, having you think that this is as high it gets, only to be followed by a song that invokes a feeling of hearing something even greater. Since Side Effectz's "A.O.T.S. The Album" in 2008. to 2011:s "The Wood Sessions", their third official album cuts back on anything that might remsemble filler material to create the AOTS crew's finest and most impressive project to date. It's a very smart move to settle for just nine songs and an intro, whereas more material almost certainly would have harmed the overall feeling of the album, despite any additional tracks unlikely being wack. In that vein, it's truly a record that really warrants a front-to-back listen, as each song leds to the next one until the final climax of "Kaddu" and "Focus". All in all, this is by far Linkan's strongest performance on any LP yet, El Juancan's beats are some of the fattest of his entire career (just check the beautiful hip-hop homage "Red" or the breakbeat driven throwback that is "Thunderkings" which apparantly was a beat originally made about 8 years ago). El Akopalip' contributions are the closest five tracks to what we heard on "The Wood Sessions", though there's no questions that he's evolved even further as a producer, and makes a great contrast to Juancan's beats. One thing is for sure, Sweden's hip-hop scene is more alive and kicking than it has been since the emergence of Loop Troop and The Latin Kings, and Side Effectz's and their "Wunderbaum Music" is a testament exactly to that. Take a listen below via their Bandcamp page, where you can also download the 10 tracks for a cheap dollar and order the vinyl almost as cheap. DON'T SLEEP!

Email ThisBlogThis!Share to TwitterShare to FacebookShare to Pinterest
Labels: Review, side effectz