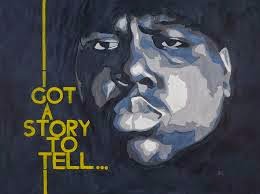 The Notorious B.I.G.'s sophomore "Life After Death" LP received a rare 5 mics review in The Source; and don't get me wrong, it's an absolutely incredible album that indeed has a 5 mic album hiding in there somewhere. Had filler cuts like "Fuckin' You Tonight", "Mo Money' Mo Problems", "Another", "Nasty Boy", "Playa Hater", and peharps one or two more joints been scrapped, "Life After Death" had in my humble opnion been worthy of that most extreme rating. Played like a single disc album makes all the difference in the world, making it in many ways even equally as  great as "Ready to Die". Both beats and deliery are more polished, while still leaving room for a large part of the album to be dark and unforgiving (much thanks to contributions from Carloas Broady & Nashiem Myrick, RZA, DJ Enuff, Havoc and DJ Premier) and BIG had foud an ever deeper confidence on the microphone.

Like with so many LP:s what was originally recorded by the artists and producer are not always what end up on the retail album, and such is the case we're gonna be discussing today. D.I.T.C. producer Buckwild excellent contribution "I Got A Story To Tell" - an emcee class in storytelling 101. Looking at the album credits it read that Buckwild's production features co-production by Hitmen Chucky Thompson and Puff Daddy. But what exactly earned them that credit? Check Buckwild and Thompson themeselves break down the specifics in XXL:s The Making of "Life After Death".

"Big picked beats on vibe, and he was looking for beats to fit into the album. Big was the type of dude where there could be 50 people in the room and you think he wouldn’t be lisening. You’d play him 50 beats and you’d think he wasn’t paying attention, ’cause he’s sitting there smoking and zoning out. And then at the end, he’d be like, I want number 12, and put number 30 on a tape.

The song was done, and everyone was telling me the song was incredible. That was all I kept hearing. But we had big problems with the sample. It almost didn’t make the album. Working with Puff, it was a blessing that he had people who could come in and get him around the sample issues. Chucky [Thompson], being an excellent musician, he replayed it and found the exact same sound. Chuck just had to change one or two notes. If I played the original and I played the sample, there’s nothing really different."

Buck is almost correct on this, the two versions are extraordinary similiar but I believe that a fully mastered version of the sample-based mix would have the slight edge. I'm not sure where Buck sampled the harp- and guitar based centre from, but the drums was lifted from Al Green's "I'm Glad You're Mine". The latter drum break has been used for several hip-hop classics, including Eric B. & Ra's "Mahogany". So I would guess that they kept that drum break for the BIG album version too and that the sample problem was with the main melody as Chucky Thompson tells it:


"I liked the original way Buckwild done it. All we had to do was take a piece out, which in the original sample was really just the harp part. I knew if I could get it to the point where it’s unrecognizable, we were good. So I went in, grabbed the guitar and started filling in the pieces. I took the same melodies. I just changed a few of the instruments. I moved it from harp to the guitar, put a little bit of harp in there, but anybody that knows that original record is probably scratching their head, like, “How the hell did he…?”

The album version of "I Got A Story to Tell" is no doubt a classic, and while the original Buckwild mix was thought lost forever it actually surfaced on the 2007 mixtape monster "Cristopher Wallace - The Last King Of New York" by Doo Wop and Mike Nice. The latter's set included, amongst tons of other interesting rarities, demos, remixes and original versions, the so called "Buckwild OG Demo Mix" of "I Got A Story to Tell". While the sound quality might not win any sonic awards it does give us a terrific insight into the creation of the song. If you imagine it mastered and in CD quality - which version would you prefer (the video above is of the album version for reference)? I wil probably do a post on the entire Doo Wop/Mike Nice tape soon enough so be on the lookout, but what's funny is that the OG Buckwild Demo you hear below is actually from another source that sound a lot cleaner than the one on the mixtape! Feel free to drop a comment on your thoughts about your thought about these two versions of "I Got A Story to Tell"!