This Wu-Tang Clan affiliated quartet hails from Staten Island, New York, and consists of emcees Lounge Lo, Wigz, Molly-Q & Crunch Lo and despite being around in the '90s and member Loung Lo being Cappadonna's blood brother, the crew never got the break the few 12" released singles promised. These two three track EP:s ("Caught My Eye"/"Money Getters"/"We Othorized" and "Pictures Of Life"/"The Plan"/"Flambouyant") were released in 1994 and 1995 on Vortex and Redline Recoreds, respectively. Although only six tracks in total, these cuts left a lasting impression on many underground heads and hardcore diggers as they revealed a hungry group very with a sure shot formula for creating unforgiving, hardcore hip-hop with substance, Despite the Wu-Tang affiliation I am not sure if they were ever intended to release an album under Wu-Tang Records (such as Tekitha, Royal Fam, Darkim Be Allah, etc.) and they did not appear on the Killa Beez compilation in '98. 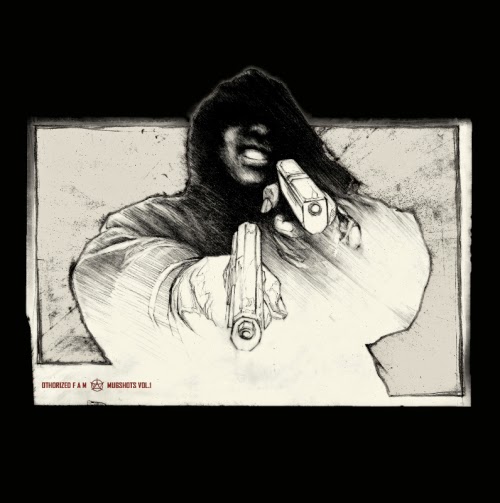 After a long silence the quartet finally was able to secure a deal with G-Clef's Chamber Musik in the late 2000s and managed to release "1st Amendment" which secured a release for a lot of the material the group had been recording throughout the years and sported features from Ghostface Killah, Cappadonna, Polite, Lord Superb, King Just and Leathafase. They also released a follow-up on Chamber Muzik the following year called "Hot Like Sahara Sand", but this is not a history lesson but rather a post about the brand new Othorized F.A.M. EP "Mugshots Vol. 1" which focuses on material from the '95 years and getting a limited release by Heavy Jewelz Records. A couple of the tracks has been released before but has been remastered to reach sonic perfection, and the EP (which is split into a "Staten" side and a "Gaten" side) also includes an alternative version of the underground classic "The Plan" which has a completely different verse, the "Mugshots" demo that was played by Stretch Armstrong only to never be released, "Easy" and the previously unreleased "Othorized Bloodline". All tracks have been touched up to the upmost, giving this EP and extreme remastering job worthy of a lost underground classic like this. "Mugshots Vol. 1" was mastered for vinyl by Adam B, cover art by Spacek The Architect, logo design by Othorized and labels by Debonair P. As far as the music goes all songs are produced and written by Othorized F.A.M. Check out the sampler up top and as I'm sure you'll be blown away head over to Heavy Jewelz to order a copy while they still got 'em. Also download the previously released version of "The Plan" below and let the volume BUMP!!