Instrumentals: Diamond District's "In The Ruff" 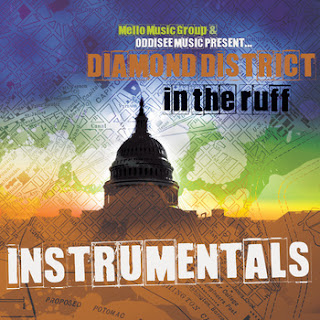 I just received this mail from Mello Music Group with some great news. Diamond District has decided to let the entire instrumental album, of course fantasticly produced by Oddisee (with a little help from SlimKat78, Dunc and Kev Brown on one song each which are all just as dope), be downloaded for free starting today and until next Friday. "In The Ruff" was one of my favorite albums of 2009 and although XV, YU and Oddisee was nice on the mic it was the vintage boom bap beats that captured me the most, and still do. I haven't listened yet but I would imagine this is a great instrumental album too, some hip-hop albums sounds great in instrumental version while others just don't work, but oh well.
We need more artists like Oddisee, he clearly does this for love. He released several free EPs and instrumental projects through Band Camp; when Diamond District first dropped they gave a edited version of the album out for free and people still bought it when it came out since it was so dope - like he often says "this is is the latest edition of what you've been missing". Scroll down a few posts and download Oddisee's 2009 solo debut with some additional bonus tracks for free, another gift he gave for free to his fans via Bandcamp. And he already got a rep as a dope producer.