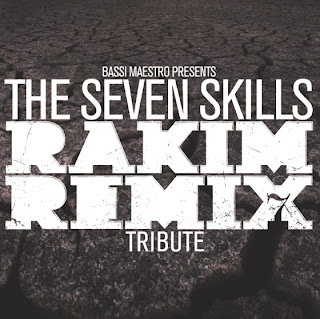 Between 1997 and 1999 The Microphone Fiend dropped two albums for Universl Records; "The 18th Letter" and "The Master". Both had their moments but was far from the level of his four earlier classics although they both had their fair share of real hot tracks (incluing the later LP which caught a lot of flack from fans). One year later, Ra signed with Dr. Dre and Aftermath and started recording "Oh, My God", an album that still remains unreleased after The R was eventually dropped from the label, save for a few songs and some guest spots either produced by Dre or with Aftermath artists (on a side note, you can anticipate a Rakim/Aftermath compilation soon, featuring all leaked/released tracks from his time on the label). Instead all material recorded with Dre in L.A. was scrapped. Instead Rakim recorded completely new songs for "The Seventh Seal", his long delayed third solo album that was finally released in 2009.

I've read so many negative reviews of that LP which is nothing but a god damn shame if you ask me! Sure, it had a few questionable tracks, mainly on the productionn and hooks side, but there were enough of plenty of fat productions that both suited Ra's sound while keeping with the times (for example tracks like "Holy Are U", ""Walk These Streets", "Man Above", "Still in Love", "Euophoria" and "Won't Be Long"). And lyrically it might just be Ra's best solo album, maybe not flow wise but lyrically the album is filled to the limit with clever and well executed themes and concept songs, more so than any other Rakim album (even including the Eric B. joints). One of my favorite tracks on it are the perfectly executed "Working For You" which has an amazing soulful beat using the classic hip-hop sample source "I Forgot to be Your Lover", although it's in fact The Robert Cray Band's take on the composition rather than the original William Bell version used for classics by artists and producers including Alchemist/Dilated Peoples, True Master/Killah Priest and P.King/Ludacris.

On the sleeve for "The Seventh Seal" the production credit for "Workin' For You" was left blank. The story goes that Rakim somewhere along the line had been given a beat tape by someone and by the time the album were being pressed he had totally forgot who was behind the beat. Of course it didn't take long until Italian producer Bassi Maestro made everything in his power to make sure the world know that he was the one behind the song Ra rhymed over on his album. Just check Maestro's 2004 cut "Tu Non Mi Rispetti" for Italian artist Sano Business which clearly shows he's telling the truth in this matter. Since "Working..." is one of my absolute favorites of an album I always felt the need to defend against the unwarranted hate it drew upon itself, I found Bassi Maestro's tribute tape to Rakim very interesting and should definitely be heard by any fan of the song mentioned above. It's a dope remix tape that runs for about 25 minutes featuring exclusive Maestro beats put together with classic Rakim rhymes. Most of the songs are really ill though there's a couple I felt were very average. The only problem I have is why remix classics that don't need to be touched upon ("Follow the Leader"; although a tight version; and "I Know You Got Soul"). What I want to hear is Maestro's take on more recent Ra material which gives us an inside look of how Bassi Maestro's Rakim collaborations would've sounded if he the Italian had gotten mroe placements on "The Seventh Seal". Luckily, the continous mix features remixes of "Hip-Hop", "It's Nothing" and "Holy Are U". Since the mix is placed in one continious downloadable or streamable track, you can scroll down to the bottom of the Soundcloud page and choose to stream the individual joints.

Posted by lost.tapes.claaa7@gmail.com at 5:58 AM